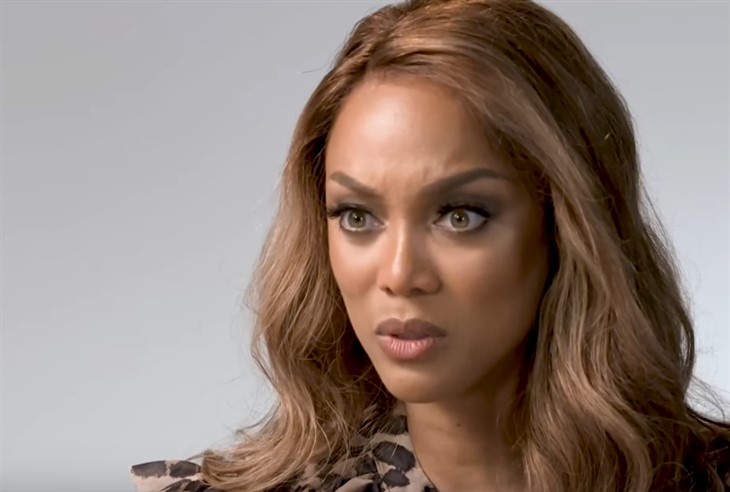 Dancing With The Stars (DWTS) fans claim to despise Tyra Banks, and popular opinion seems to point to disney+ making a mistake in keeping her as host. However, for someone apparently so unpopular, she has a lot of fans who follow her. And, thousands of people adored her glittery, glitzy outfit at the premiere on September 19.

Dancing With The Stars – Tyra Banks Hanging On By A Thread?

When fans heard that the show would migrate to disney+ from ABC, plenty of people hoped they would dump Tyra. In fact, in previous seasons, fans regularly claimed they wouldn’t watch again because of her.  Clearly, she didn’t get read the riot act when disney+ considered keeping her on, And notably, none of the pro dancers or judges claimed they also wanted to see the back of her.

Dancing With The Stars fans felt vindicated in their criticism of Tyra earlier this year. It came when America’s Next Top Model stars alleged that she bullied them. Well, it hurt Tyra to see so much backlash. However, she vowed to hold her head high and carry on being the “queen bee!” Well, she did exactly that during the premiere and a lot of folks loved her outfit.

Dancing With The Stars – Host Is Popular With Millions Of Fans

This year, DWTS fan heard that Tyra would co-host Alphonso Ribeiro. So, critics wished that he could be a stand-alone host, without Tyra. In the past, she was often accused of making the show all about herself. And In a way, she did. But how many reality TV stars don’t post their glam outfits?

After the premiere, she posted a photo and said, “About last night… The dancers werked it on the dance floor and my team werked my ‘fit and glam!” Plenty of comments went in from loyal Dancing with the Stars fans. With over seven million followers, if any negative comments went it, it takes some scrolling to find them.

Dancing With The Stars Season 31 Fans Have A Major Issue With Disney+ https://t.co/ojbjXqd9Id #DancingWithTheStars #abc pic.twitter.com/TiVnzzhes2

Dancing With The Stars – Fans Pour Into The Comments Section

Dancing With The Stars fans on Instagram didn’t hold back with their praises for the host. Here is a small sample of those comments:

Golden hour all the time 🔥queen.

You and Alfonso did so well together.

know my opinion means nothing to you however this season premiere night your gown and your hair was f****** on point and stunning.”

Plenty more of those compliments arrived. It actually becomes obvious that once again, complaints and bad news tends to get the headlines because people seem to thrive on it. What are your thoughts? Sound off in the comments below.