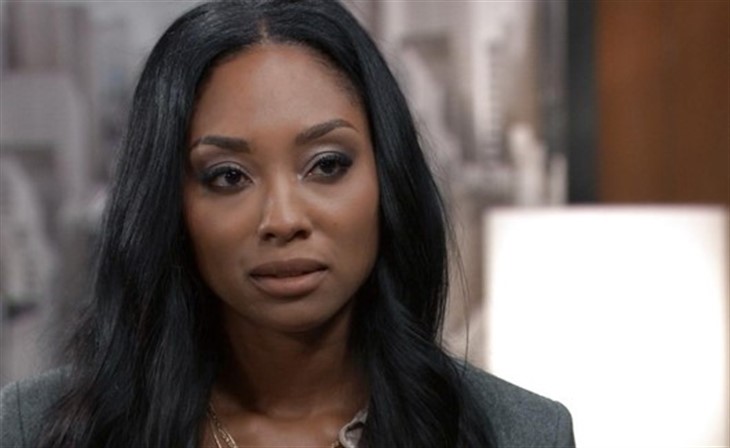 Jordan’s overheard enough conversations that should have been private to get enough clues that Trina is really Curtis Ashford’s (Donnell Turner) daughter. Portia had denied it a couple of years ago when they first reconnected in Port Charles, having had an affair about the time that Trina would have been conceived. Jordan recently had a conversation with Marshall Ashford (Robert Gossett) who had revealed that he’d left his family when Curtis and his brother were children over his schizophrenia diagnosis.

He had been concerned that his late son and Jordan’s first husband, Tommy Ashford (mentioned character) had developed schizophrenia. Jordan had assured him he had not, and his symptoms were of post-traumatic stress disorder, then heard Portia on the phone trying to set up a genetic test for Trina.

A conversation with Curtis tips Portia off that it’s possible Jordan suspects she’s lying about Trina’s paternity, and an alarmed Portia confronts Jordan over it. Jordan asks Portia point blank if Curtis is Trina’s father, knowing from experience keeping secrets will ruin their impending marriage. But also in the back of Jordan’s mind is the suspicion that if she had been totally honest with him and not kept all those secrets that they’d be together. Now Portia is doing basically the same thing that Jordan had and Jordan lets her know in no uncertain terms she’s onto her. Jordan tells her that Curtis needs to know, no matter who tells him because she doesn’t want him to find out another way and be hurt again.

General Hospital Spoilers – If You Don’t Tell I Will

Jordan even threatens to tell Curtis her suspicions if Portia doesn’t first, and she doesn’t confirm or deny Jordan’s allegations. Portia just wants to know if Jordan intends to tell Curtis that she suspects he’s Trina’s birth father or not, and Jordan knows she’d be meddling if she does. But Jordan is concerned that she may have to be the one to tell him about Trina possibly being his daughter if Portia refuses to.

Jordan knows that Curtis is a grown man and that he is perfectly capable of making his own decisions, but she wants him to make informed ones. If Portia is going to keep such an important thing secret from Curtis, Jordan wants him to know what he might be getting into.