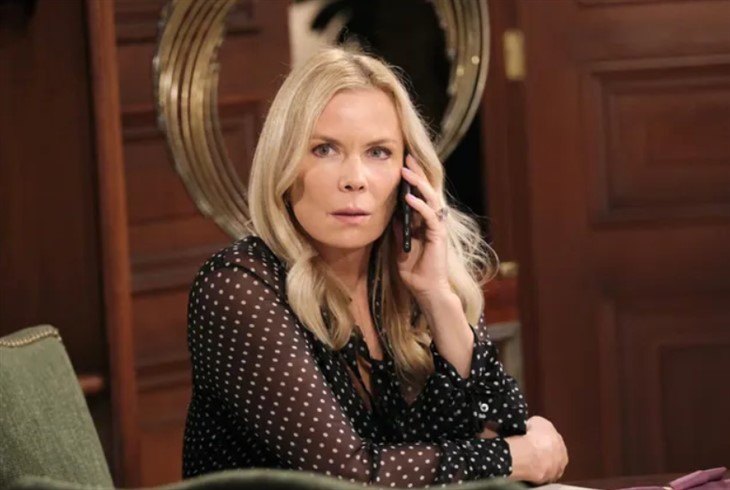 The Bold and the Beautiful spoilers for September 26-30, 2022, reveal Ridge getting quite a shock and Deacon making quite a deal.

The Bold And The Beautiful Spoilers – Goading A Temper

Brooke Logan Forrester (Katherine Kelly Lang) has to realize if you are rotten to people long enough they may snap and be rotten right back at you. Now, violence is not condoned but she’s gotten into people’s faces before the same way Thoams Forrester (Matthew Atkinson) gets in her face, but this ends up leaving Brooke allegedly terrified despite the fact that she once pushed Thomas right off a damn cliff.

The Bold And The Beautiful Spoilers: Bill Remains An Option For Brooke – Triangle With Li Emerges?

Later, Ridge Forrester (Thorsten Kaye) is surprised when a CPS agent shows up at the Forrester mansion to check on Douglas Forrester (Django Ferri), who is just fine. Ridge tries to wrack his brain to try and figure out who would have called the agency and his mind goes to his own wife. She will deny everything, but is she actually telling the truth?

B&B Spoilers – Nikki Newman Has Deacon Sharpe On Her Side

After sparring with Deacon Sharpe (Sean Kanan) for days, Nikki Newman (Melody Thomas Scott) is able to state her case and since Deacon seems to be a sucker for a woman in trouble, he agrees to help Nikki bring down Diane Jenkins (Susan Walters) all the way in Genoa City. The pair make a deal with one another and Deacon is actually apologetic for letting Nikki believe she killed a woman who was not really dead.

Deacon already has enough trouble trying to hide Sheila Carter (Kimberlin Brown) and save his own hide from going back to prison for harboring a fugitive, so the man who just wanted to have a relationship with his daughter, Hope Logan Spencer, now has too many crazy women to juggle for his own tastes. Will Sheila learn of the deal he just made with Nikki?

Before Nikki heads back to the midwest, she also pays a visit to one of her favorite people, Eric Forrester (John McCook). The friends share a happy reunion but then it’s time for Nikki to board a plane and return to The Great Victor Newman (Eric Braeden). Too bad she never managed to run into Sheila while she was there. Stay tuned to The Bold and the Beautiful weekdays to see how these stories play out.