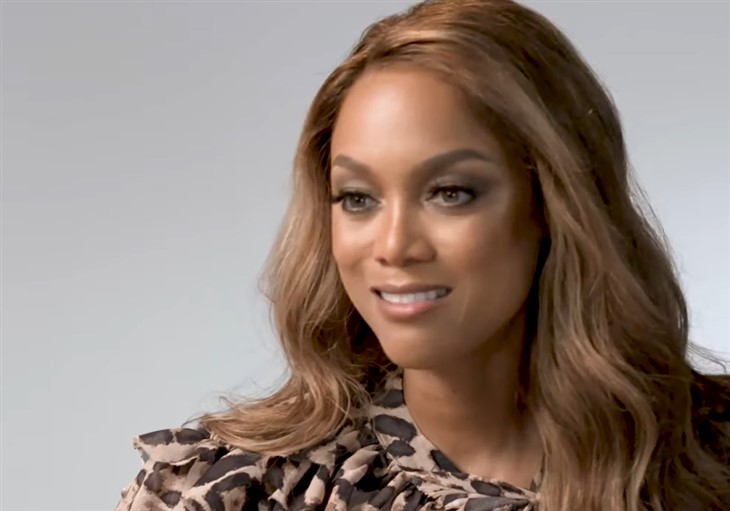 Dancing With The Stars (DWTS) put on a fine opening dance for Elvis night on Disney+. However, when Tyra Banks stepped out in her outfit, she left fans aghast. In fact, some of them think that whoever dressed her committed a crime in the world of fashion. And, they wondered who on earth dressed her.

When Season 31 premiered, a lot of people loved Tyra’s style. Flowing and golden, it shimmered with glitz. Fans who saw her repost it took to her Instagram and thousands of nice things were said. And, that came despite her messing up on live TV yet again. Actually, you would never know from all of those comments, that so many people want her gone from the show.

DWTS fans had hoped that Tyra would not feature as the host when the show migrated to Disney+ from ABC. However, they obviously decided that she should stay. Mind you, they made a sort of compromise when they brought in Alphonso Ribeira as co-host. Perhaps the hate from detractors helps with the ratings or something. After all, the show had some unpopular characters competing in the past.

The sixties had some nice women’s clothing and some of the dancers looked great. But, Tyra seemed to go with the mini-skirt look. Combined with a leather jacket and very large belt, she didn’t impress many folks. Especially, as Alphonso toned it down in neat navy blue. Actually, fans of the show felt that the outfit that Tyra wore really did nothing for her. And without commercial breaks, she had to wear it the entire episode.

Most of the comments that slapped at the outfit the DWTS host wore, came on Twitter. There, one critic opined, “I was watching Dancing With The Stars tonight. Who on earth is dressing Tyra Banks ? She looked awful. I truly was embarrassed for her. Her outfit was absolutely hideous.“

Meanwhile, Kim Cea has something to say as well. She opined, “Finally, WTF was TYRA BANKS wearing for ELVIS NIGHT?!?” Previously, she tweeted, “It’s moments like this that make me RUN & TWEET.”

Dancing With The Stars – Other Critics Slam Tyra As The Host

DWTS fans are not afraid to have their say about the infamous host. Actually, a lot of them seem very peeved by the fact they now have to pay a subscription to watch her.

Another irritated fan of the show asked, “How awful does Tyra Banks need to be before she’s off the show? “

What are your thoughts? Did you hate the outfit that Tyra Banks wore on Elvis night? Do you think that she’s a terrible host? Sound off in the comments below.