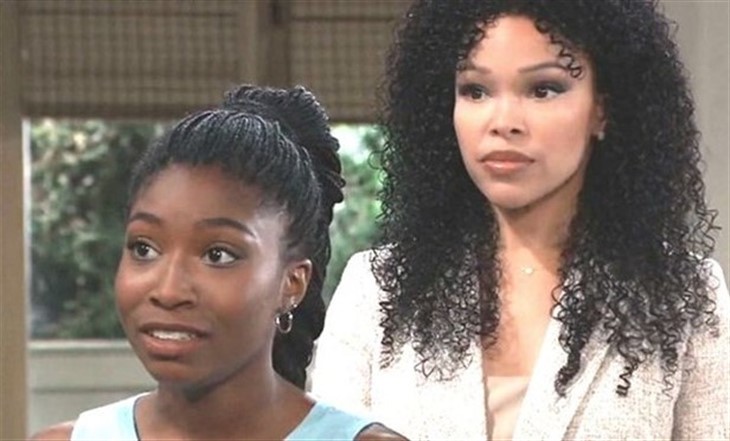 General Hospital Spoilers teases the secret Portia Robinson (Brook Kerr) has been keeping from everyone she loves will come out soon. While Portia is certainly worried about the impact it could have on her engagement and future marriage to fiancé Curtis Ashford (Donnell Turner), she won’t be prepared for the fallout between herself and her daughter, Trina Robinson (Tabyana Ali). Will Trina be able to forgive her mother for keeping the truth about her father to herself?

General Hospital Spoilers – The Past Is Catching Up To Portia Robinson

Years ago, Portia was married to Marcus Taggart (Réal Andrews), but his job in law enforcement kept him away from home often, and the couple’s marriage just couldn’t hack it. Their love affair painted Portia in a certain light, but Curtis was off the hook when fans learned he never knew she was married when he was involved with her. As soon as Curtis became aware that Portia was already wed to someone else, he ended their relationship. Perhaps Curtis has been a stand-up guy all along, but he sure does pick some interesting women!

Fast-forward to today and the duo has had so much fun falling in love again all these years later — at a place in their lives where both are emotionally available to each other, or so they thought. Curtis and Portia have had a chance to see their relationship through this time. Unfortunately, they might be approaching their end. Portia conceived a baby during her affair with Curtis way back when, and she let that child — and everyone else — go on believing she was the daughter of Portia’s then-husband, Taggart.

Portia may have thought she would be able to take this secret to her grave, but when she almost met her maker while locked in a basement that was rapidly filling with carbon monoxide, she let slip that her daughter didn’t know the truth about her father. Fortunately for Portia, the only person present at the time was Jordan Ashford (Tanisha Harper), and she was losing consciousness. Since then, Jordan didn’t appear to be aware of Portia’s almost-confession, and Portia has kept her lips sealed. However, recent news has her feeling unnerved and concerned for her baby girl’s health.

Marshall Ashford (Robert Gossett) — Curtis’ father — came to Port Charles recently, and confessed the reason he walked away from his sons when they were just children was that he was diagnosed with Schizophrenia. This sent shockwaves through Portia knowing the genetic inheritance of this illness could be passed on to her daughter.

Sure, Curtis will be furious with his wife-to-be, and she may very well lose that title in the process. Still, he’s not the only one certain to be nursing a wound over this truth. There are other relatives involved who were also robbed of the experience of having Trina as part of their family unit. Marshall might balk but he hasn’t much room to since he was voluntarily out of the family picture for decades. However, T.J. Ashford (Tajh Bellow) is a stickler for honesty; he might have a thing or two to say about Portia keeping the truth about his cousin under wraps.

Likewise, Curtis’ aunt, Stella Henry (Vernee Watson) will feel betrayed by Portia, and knowing Aunt Stella, she’ll also feel all of Curtis’ heartache, too. Stella loves family, and seeing how Curtis was robbed of the opportunity to help raise his daughter will shatter her heart.

Taggart is also not likely to take the news well, and despite knowing he will remain Trina’s father in her heart, he will feel a part of himself has been lost. Certainly, young Trina will take the truth the hardest, particularly if she finds out from anyone other than her mother.

Trina might need an extended break from her mother, and this won’t be anything like when Trina was upset with Portia after discovering she’d had an affair when she was still married to Taggart. When the dust settles, count on seeing Trina and Curtis both make an effort to get to know one another on an even deeper level. Don’t forget to circle back to us daily for spoiler updates on Trina and her dad-to-be-who-always-was.!