The Bold And The Beautiful Spoilers: Sheila Addicted To Risk – Deacon Feels Like He Is Married 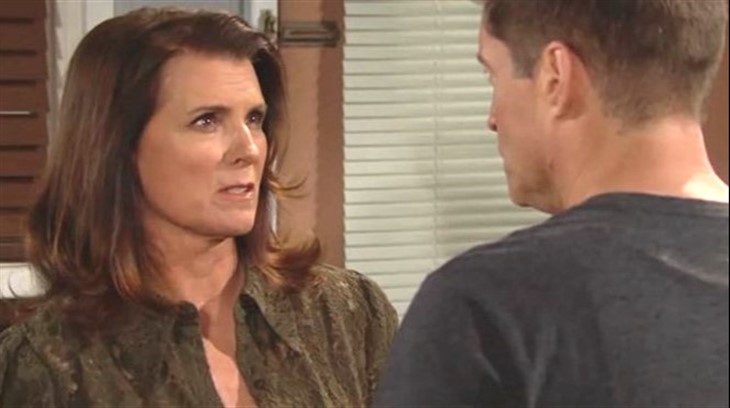 The Bold and the Beautiful spoilers document that Sheila Carter (Kimberlin Brown) refuses to be contained inside the walls of Deacon Sharpe (Sean Kanan) upgraded apartment. Once again, she donned her Lina disguise and appeared at Il Giardino, where a crossover character from The Young and the Restless took notice of her odd appearance.

B&B fans know that Deacon was forced into a soapy scenario, where Sheila is playing off his sympathies. She also holds the threat of a parole violation over his head like the Sword of Damocles.

However, Sheila’s position of power is fragile. She could only turn Deacon into the authorities as a last resort if he forces her out of his home.

It felt off that Kaye’s character was not written into the scene. He was with Taylor Hayes (Krista Allen) and then, Brooke Logan Forrester (Katherine Kelly Lang), which made some plot sense based on the current drama that trio is experiencing.

Nikki’s mention of Sheila should result in her relaying that information to Lauren Fenmore Baldwin (Tracey Bregman), a former Y&R to B&B crossover character. She is arguably Sheila’s all-time greatest nemesis.

Deacon can not get through Sheila’s thick head. And that has nothing to do with the red wig she wears when venturing out in public. She is determined to reclaim a connection with John Finn Finnegan (Tanner Novlan) and his son, her grandson, Hayes Forrester Finnegan (Iliana and Vienna Norris).

Sheila’s irrational hope overlooks that Finn, along with the rest of the world, believes she is dead. Her perceived demise was part of the discussion that Nikki, Steffy, and Eric had at FC.

Kudos to B&B’s writing staff for creating a humorous reconnection between Deacon and Sheila. Devoted fans laughed out loud at Sheila, in her Lina disguise, overtly looking at Deacon at Il Giardino and then arriving at his apartment later that fateful day.

Lina’s reveal as Sheila the next morning included Deacon noticing a missing middle toe. He put two and two together and realized, to his shock, Sheila used another of her nine soapy lives and was not dead on B&B.

Deacon’s comments about feeling he was married projects further drama. Sheila can not be contained and seems certain to damage Deacon’s life and potentially escaping once more with the Nikki sighting making her nostalgic for her not so good old days on Y&R.