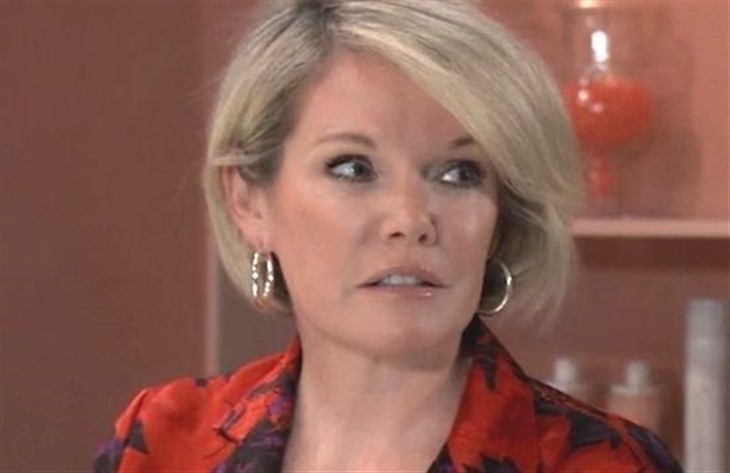 General Hospital Spoilers tease Esmé Prince (Avery Kristen Pohl) is going to get what’s coming to her — and so will her psycho father, Ryan Chamberlain (Jon Lindstrom). When Ava Cassadine (Maura West) leaves the hospital after being attacked by The Hooker, she will struggle to shake off the feeling that Ryan was somehow behind it. Her murderous ex has taken so much from her, including her daughter, Kiki Jerome (Hayley Erin). Will Ryan continue to rob Ava of happiness?

Yes! Ava’s near-death experience being hooked has had a serious effect on her. She decides to stop by Spring Ridge to visit Ryan. From time to time, Ava has found herself needing reassurance that he really is locked-in and unable to harm anyone, and being attacked recently has left her unnerved.

But while she’s at Spring Ridge, she might overhear the guards talking about the visitor that was there to see Ryan before Ava arrived. Puzzled that anyone would want to visit Ryan, Ava will wonder how he could have a friend in the world. She will prod Ryan with rhetorical questions about his female friend, and she’ll seemingly write it off as another victim who came to delight in his paralysis just like she has.

She might just be messing with Ryan, but Ava will be genuinely curious who would care about Ryan enough to come spend time with him. Before she leaves, she will use her charm and Jerome/Cassadine ways to coax just one piece of information out of the guard about who the visitor was that came before her. Unbeknownst to him, it will be all Ava needs to know when he tells her the young lady was a former intern who worked with Ryan.

Ava’s curiosity is lit ablaze. At first, she will consider it impossible that Esmé is still alive, and will question why she hasn’t surfaced if she’s not dead. After spending days brooding on it and turning up no connection on her own, Ava will hire Felicia Scorpio (Kristina Wagner) to research the connection between Ryan and Esmé — and what she finds will astound everyone. Ryan is Esmé’s father — and now his worst enemies will know it!

Aware of Esmé’s survival, and hyperaware of her familial ties to Ryan, everything will suddenly make sense — why Esmé encouraged Spencer Cassadine (Nicholas Chavez) to harass Ava; why she seduced Ava’s husband; why she framed Trina Robinson (Tabyana Ali) why she helped torment Ava, and much more.

General Hospital Spoilers: The Hook Will Bring Out a Side of Sonny We Haven’t Seen Since Before Nixon Falls #GH #GeneralHospitalhttps://t.co/p43imV7WZ8

Ava will visit Ryan again, only to let him know she knows the truth, and that he will soon know what it feels like to never see his daughter again. Little does Ava know, Ryan isn’t really locked-in, and he’s not going to stand for her threats. Keep coming back for more spoilers and updates on your favorite GH plotlines.