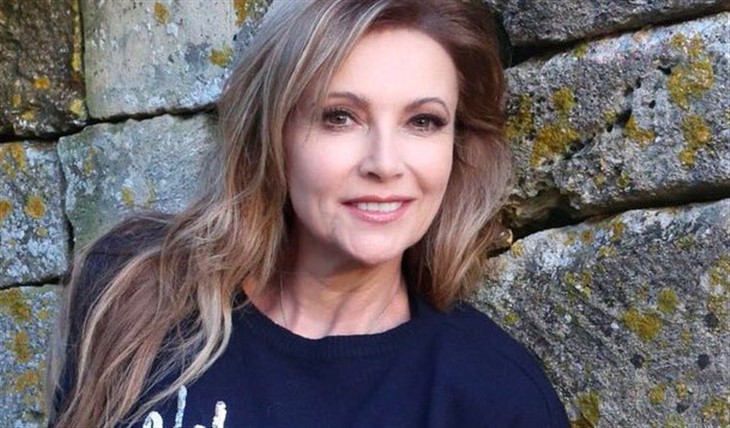 General Hospital Spoilers tease Holly Sutton (Emma Samms) is alive — and Emma Samms is returning to GH to bring the character back to life. The actress is thrilled to be reprising her role on General Hospital and told Deadline, “I can’t believe that it’s been 40 years since I first appeared on General Hospital and that, once again, I get to play the wonderful character of Holly Sutton.” Samms gushed, “No one is more interested in what’s happened to her since we saw her two years ago, being held captive by a mysterious villain, than me!”

Hearts broke all over the world in 2020 when it looked like Robert Scorpio (Tristan Rogers) would never again be reunited with his great love, Holly. He grieved in true Scorpio fashion, mostly keeping his feelings to himself as he put work and the safety of others he loved above his own emotions.

But did Robert ever truly believe Holly was dead? Maybe not. One thing is for certain: he’s had his eye on Victor Cassadine (Charles Chaugnessy) ever since he resurfaced back in Port Charles nearly a year after Robert learned of Holly’s alleged death. Something just hasn’t sat well with the WSB agent turned PCPD detective (again).

As luck would have it, Holly is alive and well — but where has she been? Robert has been busy investigating her potential whereabouts, and so far, his efforts have led him in circles. It won’t be the charming beau with an Australian accent who comes to Holly’s rescue this time. In fact, no one will have set out to rescue her at all.

Holly’s lucky break will come as Valentin Cassadine (James Patrick Stuart) and his girlfriend, Anna Devane (Finola Hughes) get a lead on potential whereabouts for Charlotte Cassadine — Valentin’s daughter. Yes, expect this scene to play out much like it did when Drew Cain (Camerson Mathison) and Liesl Obrecht (Kathleen Gati) were rescued from Victor’s clutches.

Valentin and Anna will accidentally stumble upon Holly during their crusade to get Valentin’s daughter back. But wait — then where is Charlotte? Holly and Robert will join forces with Vanna to help bring the young girl home, but not before narrowly escaping their own deaths.

Who else might Victor be hiding away from everyone back in Port Charles? Let us know what you think, and stay tuned to ABC on weekdays so you don’t miss an episode of GH. We’ll be right here keeping you satisfied in between with more news, updates, and spoilers on the lives of your favorite Port Charles people.