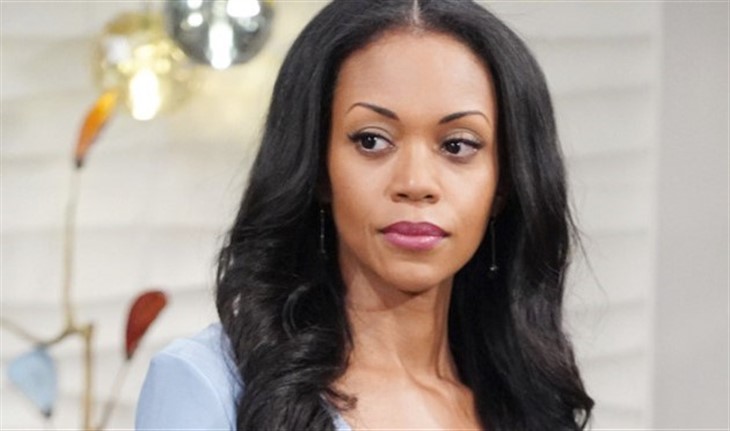 The Young and The Restless spoilers and updates tease that Amanda Sinclair (Mishael Morgan) might come home to a heartbreak. Devon Hamilton (Bryton James) might cheat on her with Elena Dawson (Brytni Sarpy) who recently moved out on Nate Hastings (Sean Dominic).

The Young And The Restless Spoilers – Full Circle

Things would certainly come full circle if Elena cheats on Nate with Devon, because that is why Devon and Elena split up; she cheated on him with Nate! That led to the enmity between Devon and Nate that seems to fuel all their interactions even to this day. Nate left medicine because Devon beat him up and broke his hand, and his hand was so badly broken that he could no longer perform surgery.

The Young And The Restless Spoilers: Victoria Has Full Say? – Chelsea Has Legal Options

In the meantime, poor Amanda has been out of town dealing with her birth mother’s serious illness, from which she may never recover. The fact that Devon stayed behind instead of traveling with her to support her when Naya Benedict (Ptosha Storey) may die says something, and it’s not good.

Elena and Devon have seemed to move past their breakup and seem to be still friends, but their friendship bond could hide something deeper and more serious. Usually rebound relationships don’t work out anyway, and Devon moved on to Amanda relatively quickly, and Elena seems to be replaying a pattern. She became vulnerable to Nate when Devon became so busy with work she didn’t get enough attention, and now Nate is too busy for her.

Plus, Nate is plotting against Devon at work and Elena knows it – and quite likely she will feel Devon needs to know and she’ll warn him sometime down the line. Devon and Elena could easily become too close and any sparks they thought were extinguished could reignite into a raging fire.

The Young And The Restless Spoilers – Moved Out

Devon already knows Elena moved out because he’s seen that she’s moved into the Grand Phoenix. He’ll be able to tell something is bothering her, and he’ll likely try to draw it out of her, but sharing relationship troubles with past partners is a slippery slope. Even sharing relationship troubles with opposite sex friends, if said friends are straight, can cause problems with attractions and temptations seemingly coming up out of nowhere.

Amanda could easily return home from one kind of heartache caused by her mother’s potential passing away to another, with her man cheating on her. As for the friction between Devon and Nate, that could also ramp up even worse.