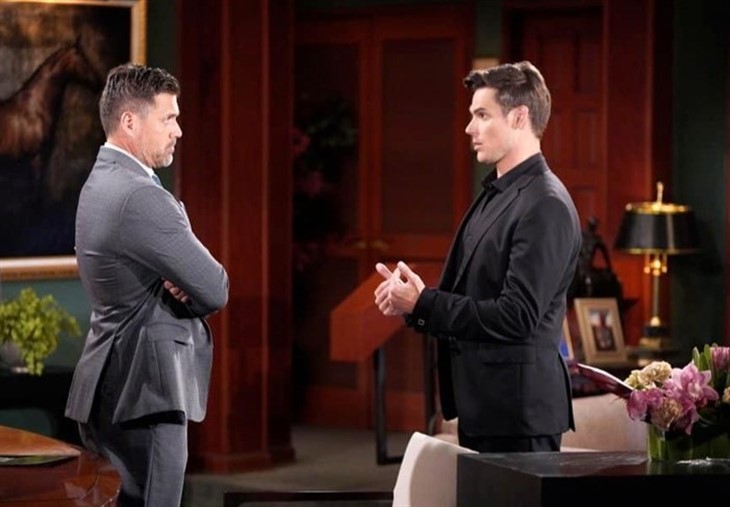 Sally Spectra (Courtney Hope) was at the front of Adam’s mind, even though he had what appeared to be a blow-out with Chelsea Lawson (Melissa Claire Egan). Nick arrived at Crimson Lights, in a classic soapy coincidence, just as Chelsea and Adam were having it out.

The Young And The Restless Spoilers – Connor Newman Is Cared For

Nick recognizes Adam as a good father. He also knows that his younger brother is Christian Newman’s (Alex Wilson) biological father, which ties into Chelsea’s mishandling of a recent reveal.

Hardcore fans recall Nick was married to Sage Newman (Kelly Sullivan). She had a one-time encounter with Adam that led to Christian’s birth. Sage died as the result of injuries suffered in a tragic car accident which was the plot device used to regrettably write Sullivan’s engaging character off the show.

Adam told Nick about Chelsea pushing the birth mother reveal on Connor Newman (Judah Mackey) after doing the same with Johnny Abbott (Paxton Mishkind). Nick was understanding and then offered positive brotherly advice about how to handle Connor’s sleepover.

Adam asked Nick to decide if he has a future with Sally. Grossman’s character told his older brother that he is in love with Sally.

Nick was asked to give Adam and Sally a chance to work out their differences. Adam’s acknowledgement of the influence Nick has with Sally was enlightening. It also reflected Adam’s evolving maturity as recent biting comments indicated that a brotherly battle had renewed.

Sharon Rosales (Sharon Case) has the longest tie to the Newman brothers. Her marriage to Nick is the stuff of soapy legend, with Shick never reconciling through to remarriage after their one and only divorce many years ago.

Adam has long counted Sharon as his most unique romantic connection. He, like Nick has often sought her counsel through the years.

Sharon’s history with Nick and Adam, along with her counseling license, makes her the ideal person to be asked to intervene or volunteer her advice on Y&R. Sally sought Sharon’s advice about Adam in the recent past and would also benefit by talking with her about Nick.