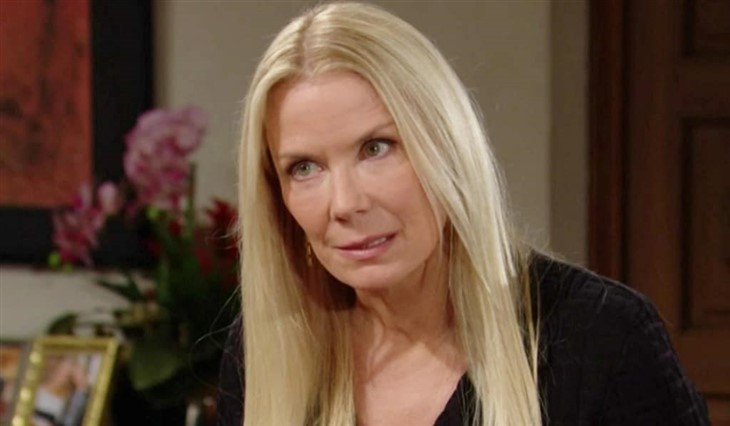 Taylor Hayes (Krista Allen) is attempting to force herself to stop chasing Ridge. She was initially considering leaving LA to get away from the heartbreak she has again been experiencing.

But Bill Spencer’s (Don Diamont) well-timed phone call gave Steffy Forrester Finnegan (Jacqueline MacInnes Wood) a chance to play matchmaker for her long-divorced parents. Ridge’s current marriage is viewed by Steffy and Thomas Forrester (Matthew Atkinson) as something Taylor can overcome with persistence and their help.

Diamont’s more-recent appearances on the scene involve his apparent developing relationship with Li Finnegan (Naomi Matsuda). Devoted viewers recall that Bill found Li behind Wyatt Spencer’s (Darin Brooks) new favorite restaurant on a wharf that happened to be where Matsuda’s character made it to shore.

Sheila Carter (Kimberlin Brown) tailgated Li to what seemed like a horrible watery death in the recent past. But Li survived by escaping her sports utility vehicle that plunged into the water on a dark and stormy night.

Bill’s entrance into the Aspen-related storyline has him offering Steffy his Aspen vacation home that he intends to put on the market if she opts not to buy it. Steffy used that opportunity to whisk her ailing mother away with the intention of talking matters out and hopefully developing a plan to reunite with Ridge.

Ridge’s head was literally hit. A pine cone conked him on the head while he stood outside his father’s mansion.

Kaye’s character sought the familiar refuge because his head was spinning after allowing his wife to explain herself. Ridge believes that Brooke intentionally called child services and reported Thomas as endangering Douglas Forrester (Django Ferri).

Ridge is not even considering that Thomas, Steffy, or some other anti-Brooke character has set his wife up. Brooke’s denial of knowing anything about the child services report caused Ridge to believe she was lying and sent him to Taylor in Aspen.

It would be a monumental shift if TPTB are writing Ridge away from Brooke, through what would be their eighth divorce, and back to Taylor. The characters Kaye and Allen play have not been married since Ronn Moss (Ridge) and Hunter Tylo (Taylor) respectively embodied those roles.

Brooke needs to learn that she is suspected of reporting Thomas and then prove her innocence before Ridge impulsively leaves her and re-couples with Taylor. Brooke’s ability to get what she wants is in jeopardy, with her romantic winning streak seriously endangered on B&B.