The Bold And The Beautiful Spoilers: Sheila Panics, Hides From Bill And Deacon 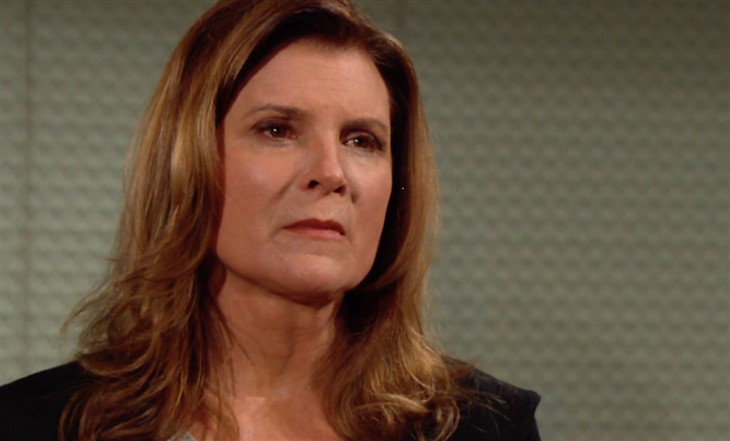 The Bold and The Beautiful spoilers and updates tease that Sheila Carter (Kimberlin Brown) will panic when Bill Spencer (Don Diamont) comes to Deacon Sharpe’s (Sean Kanan) apartment and start fighting. She’ll be afraid that Bill will find her there and then both she and Deacon might be arrested, when Bill picks a fight with Deacon and things get physical.

The Bold And The Beautiful Spoilers – What’s All The Hubbub, Bub?

Sheila has been making some bold moves where Deacon is concerned, as the reluctant roommate has been giving in to her friends with benefits moves. She’s been trying to impress him as she apparently feels a real soul mate connection in spite of his trying to get away from her, emotionally. Deacon has been trying his best to convince her that it’s not going to work, as someone eventually will figure out who she really is.

Sheila’s been sneaking out in her redhead disguise, complete with mask and glasses, she doesn’t see what the problem is. Twice she’s made it to her son and his wife’s house, the second time playing with the baby while he was on the phone.

Deacon is likely going to be mystified when an angry Dollar Bill shows up at his door, he’ll want to know what he did to make him so mad. Apparently this has something to do with Katie Logan (Heather Tom) but he still is clueless as how it relates to him, and why Bill is blaming him. The argument gets louder and more violent, and Sheila’s forced to hide in the closet when Bill tries to force his way in the bedroom. Bill has obviously had a psychotic break as he tries to force Deacon to tell him where he’s hiding Katie, because Katie’s not there and she never has been. Sheila starts looking for a trap door in the top of the closet in case Bill tries to look in there.

The Bold And The Beautiful Spoilers – Say What? I Don’t Look Like Her…

Finally they leave for the other room and Sheila can’t believe her ears; apparently Katie has a red wig that looks like her disguise and someone mistook her for Katie. They saw her flirting with Deacon in Il Giardino, making her bold move as his secret girlfriend and told Bill, and Sheila’s rather offended. She doesn’t look anything like Katie and their body types are totally different; the tattletale must seriously need glasses or he or she was drunk under the table.

Finally the ruckus ceases and Bill leaves, and Deacon managed to keep him from finding Sheila. Turns out that the outfit she wore was also one identical to one Katie had and Bill thought Katie and Deacon were having an affair.

The Bold And The Beautiful Spoilers: Eric Blindsided By Thomas’s Evil Scheme– Will He…