General Hospital Spoilers: Carly’s Revenge-Throws Peyton’s Past In Her Face? 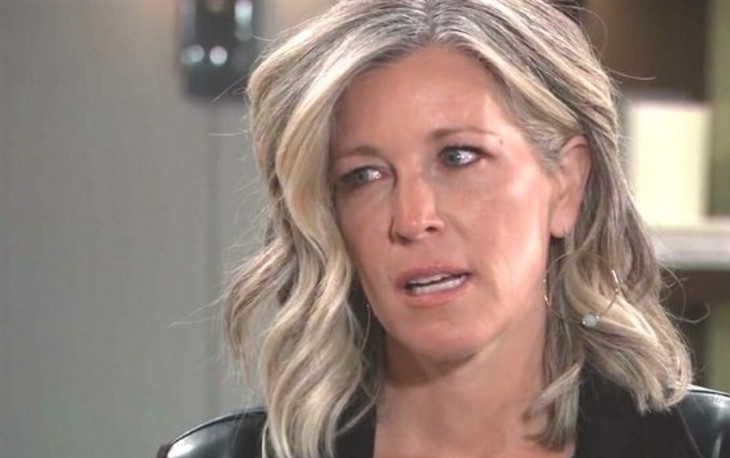 General Hospital spoilers and rumors tease that Carly Corinthos (Laura Wright) decides on revenge against Peyton Honeycutt (Linda Purl) that will also mitigate the damage she caused her in the press. Part of Carly’s preparation for her impassioned speech to the Jacksonville City Council is a thorough background check on Peyton, and Jacksonville will be shocked at what Carly found!

After the interview that Carly did with a local Jacksonville television station with Drew Cain (Cameron Mathison) the reporter warned her that powerful people may strike back. Turns out they already had, with a rival television station airing their exposé of Carly and her life after she left Jacksonville at the same time. Carly couldn’t hardly sue them for slander, it was all the truth, and publicly available knowledge; she had been in Shadybrook and married to a mobster.

Carly talks over her idea with Drew, even though she isn’t sure they’ll find anything they can use on Peyton or her past. Drew agrees a thorough background check done on her is a great idea, even though if there is dirt it may have been scrubbed.

Drew and Carly decide since time is of the essence they’ll use everything and everyone at their disposal to find the truth on Peyton and her past. Drew has people Aurora Media uses for employment checks start looking into Peyton’s past and Carly gives Damian Spinelli (Bradford Anderson) a call. When the intel starts coming in, there are a lot of questions answered as to why Peyton has an attitude against the working class and particularly towards Carly. Carly could almost understand, having lost a son of her own, Peyton holding what happened to her daughter against her, but what they find out has nothing to do with that. When they find out Peyton is not her real name and about her younger years, they’re both shocked, and Carly calls her mother, Bobbie Spencer (Jaclyn Zeman) to come there.

It turns out Peyton changed her name and did a lot of what she’s accused Carly of – basically sleeping her way to her desired lifestyle. Spinelli found out Peyton was a teenage prostitute working for Ruby Anderson (Norma Connolly) the same time Bobbie was and Carly was conceived with a john. They bring Bobbie to Jacksonville to talk about Peyton who she knew under a different name but her face is basically the same.

Peyton can’t dispute any of what Drew’s investigators and Spinelli found either, so they get their own exposé of her past ready; Aurora Media will publish it. Bobbie and Carly and Drew will all be at the city council meeting where Peyton will attend, and they’ll make sure the truth about the hypocritical Peyton is known.