Days Of Our Lives Spoilers: Li Blackmails EJ, He Knows Where All The Bodies Are Buried 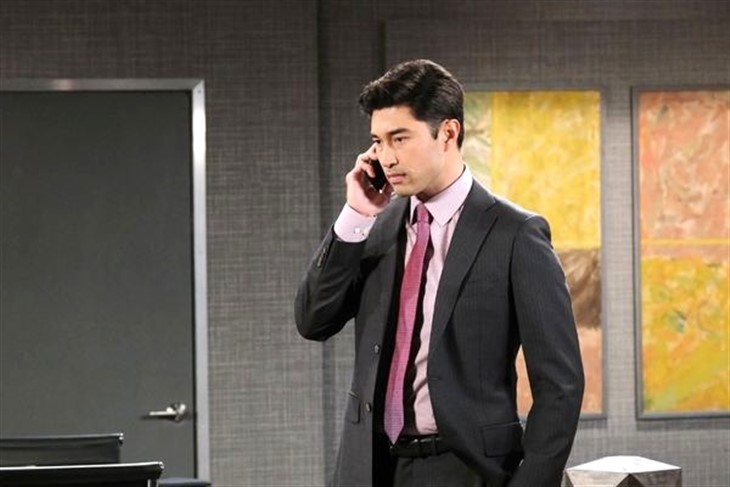 Days of Our Lives spoilers and updates tease that Li Shin (Remington Hoffman) will blackmail EJ DiMera (Dan Feurreriegel). Li knows where all the bodies are buried, so to speak, or perhaps literally so he knows he can get EJ to bend.

EJ has every intention of firing not only Gabi Hernandez (Camila Banus) but Li as well, now that he thinks he has the upper hand. EJ doesn’t care that Li’s father is the head of the board of DiMera Enterprises, he eventually wants to get rid of Wei Shin (Clyde Kusatsu) too. EJ just thinks that he can get rid of the board, part and parcel, but he doesn’t realize the Shins are the ones with all the power.

What EJ doesn’t know is that the Shins have documented proof that EJ has committed crimes ranging from kidnapping to being a drug lord, and illegal diamond trafficking. There are things that EJ has done in the past that would make Orpheus (George DelHoyo) look like a choir boy, and Li is not afraid to use them.

Not only does Li have a lot of leverage he can pull over EJ, he knows that getting rid of him wouldn’t be something Stefan DiMera (Brandon Barash) would go for. If it weren’t for the board and the Shin family, Stefan wouldn’t have become CEO of DiMera Enterprises when he first came to town with his mother. The Shins were heavily involved in the technological division of DiMera as well, and helped develop many useful things, among them Steve Johnson’s (Stephen Nichols) bionic eye. Stefan doesn’t like family members going behind his back and doing things he would not approve of; with a background as a cutthroat corporate raider, EJ underestimates him.

Days Of Our Lives – A Promise, Not A Threat

When EJ approaches Li to tell him he’s being fired and the board with him, he reminds him of the laundry list of crimes he and the Shins have documentation of. Li also reminds him the board can fire him, not the other way around, as all things have to come to a majority vote. He also reminds him of Stefan’s history with the company, and that he was around while EJ was still recovering from his accident.

Li knows where the literal bodies are buried and has no qualms about bringing the law down on EJ. If EJ knows what’s good for him, he better keeps Li and Gabi’s jobs intact or the secrets will hit the fan.