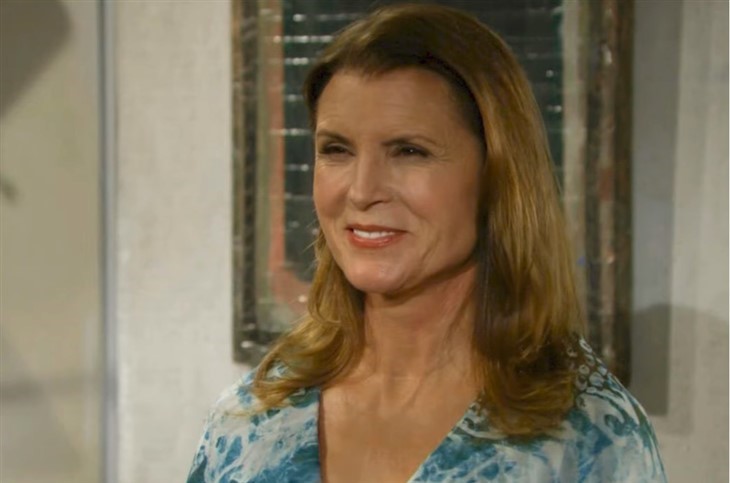 The Bold and The Beautiful spoilers and updates tease that Sheila Carter (Kimberlin Brown) will make a bold move to impress Deacon Sharpe (Sean Kanan). Might she decide to undress to impress Deacon, while cooking him a fancy meal?

The Bold And The Beautiful Spoilers – Ooh La La

A French Maid uniform might impress Deacon but Sheila wants to really get his attention; so while she cooks in a fancy black dress with see through sleeves, there is dessert. They’re hiding out, or at least she is, in his apartment so they can’t go out on a date to a fancy restaurant, not even Il Giardino. Someone could still think the redhead with the glasses now going by “Lena” reminds them of someone else recently not so deceased.

The Bold And The Beautiful Spoilers: Katie And Carter’s Rekindled Romance, Bill And Quinn Left Out

Their arrangement has almost been discovered a couple of times before, once much too close a call when Deacon’s probation/parole officer came by. The other time was when his daughter Hope Logan Spencer (Annika Noelle) dropped by and thought something was familiar about her.

Sheila wants to make an impression on Deacon by setting a romantic tone of wine, woman and wow, although the wine won’t be the beverage, it’ll be an ingredient. She knows that Deacon is an alcoholic and she isn’t pushing him off the wagon, she just wants to make a romantic scene at home since they can’t go out. She’ll make a French recipe of coq au vin, and plan some side dishes said to be aphrodisiacs to get him in the mood. She hopes her very special treatment of him makes him feel like he’s a very special someone but maybe the final wow should be cooking in the nude. She’ll have to take care not to bend too low when she lights the candles, that could be downright painful to bump into the flames.

The Bold And The Beautiful Spoilers – Eyes Like Saucers

Deacon’s eyes are like saucers when he comes home to an exquisite smell of fine French food, and even more surprised by the “presentation”.  He knows Sheila is up to something, but the food and the – sights – are a little too difficult to avoid noticing. She promises she hasn’t poisoned the food or spiked the drinks and the alcohol cooked out of the coq au vin.

She is undressed to impress and he has to admit, he’s never been served by a totally nude woman before. But he is suspicious nonetheless and dinner conversation is a bit of an interrogation; he knows she’s a tricky one and doesn’t know whether to trust her.