The Bold And The Beautiful Spoilers: Brooke Fails – Ridge Believes Taylor Is His Future 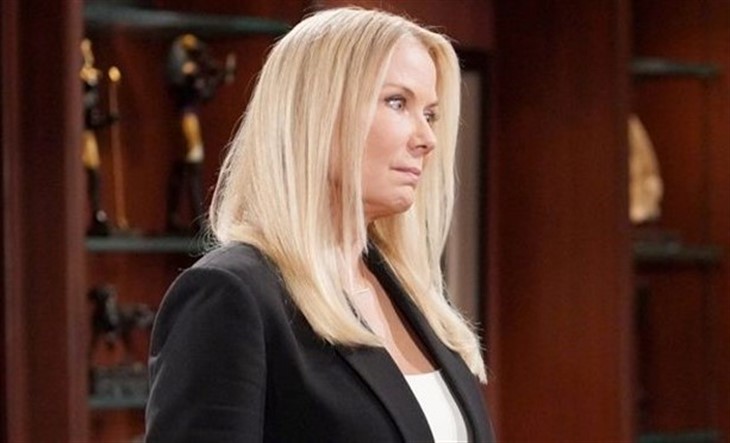 The Bold and the Beautiful spoilers document that Brooke Logan Forrester (Katherine Kelly Lang) is used to getting her way, especially where Ridge Forrester (Thorsten Kaye) is concerned. But Taylor Hayes (Krista Allen) played hard to chase in Aspen, Colorado, and won the race to Ridge’s heart.

Ridge believes that Brooke betrayed him. Viewers remain highly suspicious of the Child Services voice mail message that appeared to be left by Brooke, with Thomas Forrester (Matthew Atkison) motivated to set his stepmother up to look guilty.

What a beautiful late summer setting viewers saw on B&B. The location shoot in Aspen, Colorado, happened within the last month and is airing in mid-October, intended to be a fall scene.

Taylor wanted to get away from Los Angeles, California, because she concluded Ridge would never pull himself free from Brooke. But Taylor admitted that she was wrong.

Steffy Forrester Finnegan’s (Jacqueline MacInnes Wood) fortuitous opportunity to preview Bill Spencer’s (Don Diamont) vacation property dovetailed with Taylor’s desire to pull up stakes in LA. Steffy was not going to allow her mother to leave for good, so she quickly organized a getaway that resulted in what appears to be a long-awaited reunion.

Taylor was running up a mountain to get away from Ridge. She did not want to allow herself to fall for his charms because doing so in the past often led to heartbreak and him inevitably returning to Brooke.

But in a potentially monumental retro reversal, Brooke finds herself on the outside looking in at Taylor and Ridge. All nostalgic talk about destiny is not impacting Ridge as it had in the past.

Brooke knew the New Year’s Eve incidents with Deacon Sharpe (Sean Kanan) thrust her marriage into a fragile state. But she felt all was going well recently. But then she threatened to report Thomas to the authorities, which appears to have provoked a hidden response from Atkinson’s character.

The Bold And The Beautiful Spoilers – Ridge Forrester Holds Steady?

Ridge has spoken of his love for Taylor since she returned from missionary work in Africa. But he was unwilling to recommit to her because of his deeper love for Brooke.

Taylor’s patience just ran out, and the trip with Steffy to Aspen happened. It is wonderfully ironic that Taylor wanted to get away from Ridge and told him no when he arrived at Bill’s rustic home.

Whether Ridge wills himself to stick to his decision, especially after the truth about Brooke’s likely innocence is revealed, will be the next test of his recommitment to Taylor on B&B.

The Bold And The Beautiful Spoilers: Eric Blindsided By Thomas’s Evil Scheme– Will He…