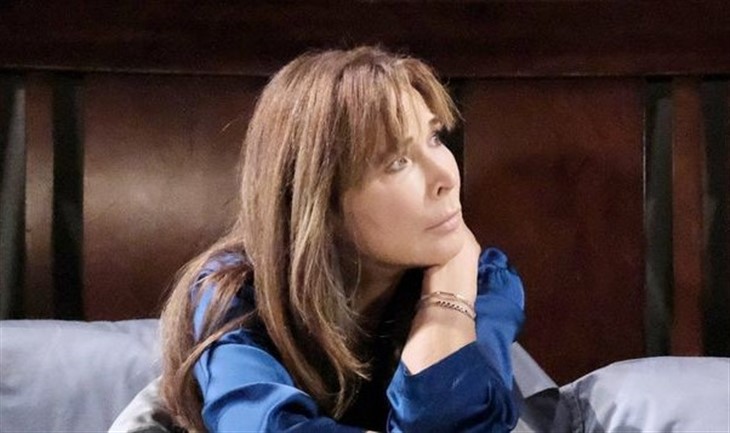 Days of Our Lives spoilers and updates tease Kate Roberts (Lauren Koslow) is fading fast from the toxin her son Rex Brady (Kyle Lowder) is trying to fight. She’s also been like a mother to Chad DiMera (Billy Flynn) – could this be his last goodbye?

Days Of Our Lives Spoilers – Not Another Goodbye…

Chad just finally came to terms with the horrific murder of his wife Abigail DiMera (Marci Miller) when her killer was brought to justice. He isn’t sure he can handle another sad goodbye to Kate, who he has been very close to since coming to Salem. Chad has felt that Kate has been a second mother to him, even though she was married to his older late brother Andre DiMera (Thaao Penghlis).

But when Chad goes to see her, he sees she is fading fast, and time is of the essence for a cure. Roman Brady (Josh Taylor) tells Chad they’re working on it but not sure a cure will be formulated in time to save her.

Days Of Our Lives Spoilers: Stephanie Pushes Chad Away!

Roman tells Chad that he convinced Kate into a deathbed marriage with his son Eric Brady (Greg Vaughan) as the officiant; Rex witnessed and all Kate’s children were called. But Kate revives long enough to receive a visit and have a talk with her “adopted son” Chad and tries to comfort him, even in her dire situation. But that’s just what mothers do – even second mothers; they cover up what’s wrong so their children won’t face fear, and Chad encourages Kate to fight. Kate is a fighter, and she’ll fight to her last breath to survive; but if Rex can’t find a cure that will work she knows her time is short. Chad wishes he could conjure up a cure or find that rare orchid and pick it for her, as well as Kayla Johnson (Mary Beth Evans) and Marlena Evans (Deidre Hall).

Days Of Our Lives – Get Some Rest, Sweet Mama

Chad doesn’t want to leave, yet he doesn’t want to wear Kate out with his visit; he tells her to get some rest and he’ll check in again. He wishes he could funnel the rage he had against Abigail’s killer into going after Orpheus (George DelHoyo) but he’s learned killing the killer solves nothing. Roman’s told Chad the Orpheus story and he realizes he could have become the same over the loss of his wife.

Days Of Our Lives Spoilers: Xander And Sarah Move Out Of The Inn, Prepare For New Addition https://t.co/Q0MmC2bShf #DaysofOurLives #Spoilers #DaysofOurLivesCast pic.twitter.com/7q4VJee2Me

The only difference is, Chad is no monster who plays head games and loves to torment his enemies. Although, he admits, he was getting close with being so filled with revenge.