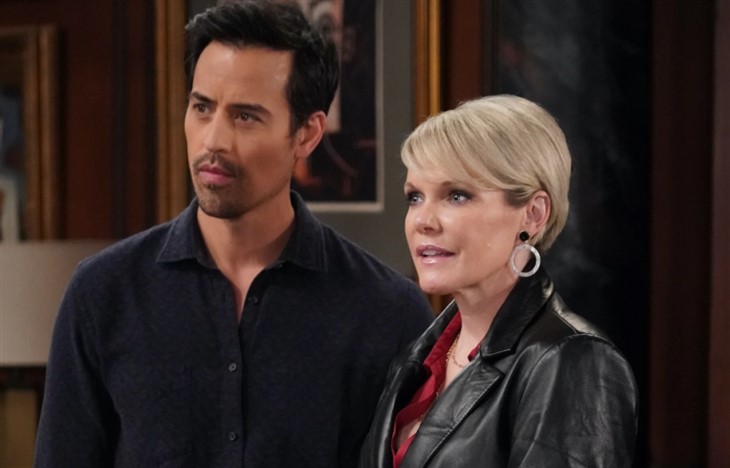 General Hospital spoilers and updates tease that Ava Cassadine (Maura West) will soon confront Nikolas Cassadine (Marcus Coloma). Could she have found out Esmé Prince (Avery Kristen Pohl) is alive and locked in a storage room in Wyndemere?

A day before Ava confronts Nikolas, she talks to Scott Baldwin (Kin Shriner) and gets some advice; she’s currently staying with Nina Reeves (Cynthia Watros). She opted not to move back into Wyndemere even though it’s plenty big enough for Nikolas and she to have separate living quarters. However, the castle is in her name since they had that crazy pre-nuptial agreement that both of them wound up violating.

General Hospital Spoilers: Trina Is The Target — Who Gets Hooked Next

She’s also in control of Spencer Cassadine’s (Nicholas Chavez) trust fund and if she divorces Nikolas that could be just one problem financially. She returned to Wyndemere briefly to tell Nikolas the news of another victim of “The Hook” being found and get some of her things.

There is a good chance that Ava may reconsider her dwelling and decide to split the castle with Nikolas, perhaps renovating the unused wing. But that is where the room is that he’s trapped Esmé in, his plans for her unsure; but he has her trapped like a rat for now. He had given Ava a confession, which she had recorded him reading, about killing Esmé with his own two hands, and her turning up alive presents a problem. As far as her purported pregnancy, he may not buy it although that baby bump did feel real! Ava comes to the castle to check out the unused wing and possible renovations, and finds an unpleasant surprise-and her leverage over Nikolas unusable.

General Hospital Spoilers – Why Did You Lie?

Nikolas arrived at Wyndemere shortly after Ava’s struggle with Esmé, where she went over the parapet and he did look for her but only found a muddy shoe. Esmé is locked in one of the rooms, and Ava leaves her there but now she knows she’s alive, and she told her about the baby. Ava is kind enough to get Esmé something to eat and drink but wise enough not to let her out, but now she thinks Nikolas lied.

She tears into him assuming he found her alive and he’s been keeping the girl prisoner in that old bedroom used for storage. They get into it, with Nikolas swearing that he was as shocked as anyone when he found her trying to rob the safe and locked her in then.