General Hospital Spoilers: Carly Catches Up With Bobbie, Her Gut Nags At Her To Share Willow’s Birth Mom Secret 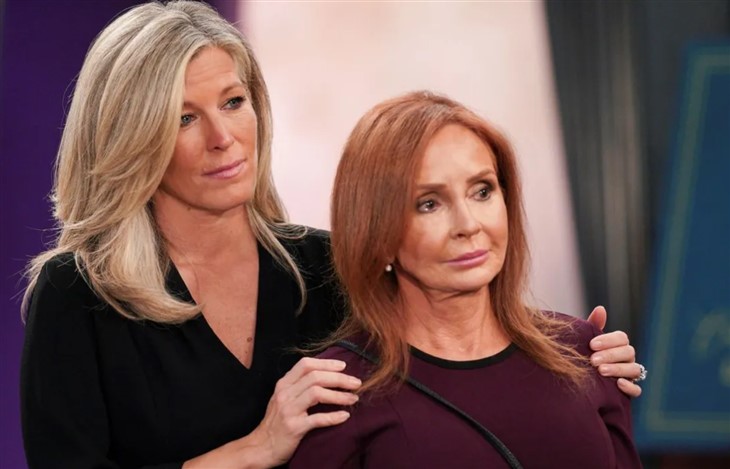 General Hospital spoilers and updates reveals Carly Corinthos (Laura Wright) came to Port Charles in the late nineties vowing vengeance against her birth mother, Bobbie Spencer (Jaclyn Zeman). To say they’ve come far since those early days is an understatement. They are the epitome of a mother-daughter relationship today. Naturally, Carly will be overjoyed to see Bobbie at her door all the way in Jacksonville, and as the two make up for lost time, Carly will have to swallow her guilt – again.

Bobbie knows her daughter, perhaps a little too well. When Carly says she’s fine, Bobbie knows better. As she pushes Carly to share with her what’s on her mind, Carly might want to, but she won’t. She knows Harmony Miller’s (Inga Cadranel) secret about Nina Reeves (Cynthia Watros) being Willow Tait’s (Katelyn MacMullen) real mother isn’t a burden she ever wanted to carry, and she won’t ask her mom to just to relieve some of her own guilt.

General Hospital Spoilers: Trina Is The Target — Who Gets Hooked Next

But Drew Cain (Cameron Mathison) is also present, and he just might pick up on some clues about Carly’s behavior when Bobbie points them out. Bobbie and Drew will also chat privately about Carly.

Peyton Honeycut (Linda Purl) will simultaneously land on Carly’s doorstep, and the two will exchange heated words once again, but Peyton’s time bothering Carly is coming to an end. So look for the Florida storyline to start wrapping up, even if some of it decides to follow Carly back to Port Charles.

As Carly reflects on her youth in Jacksonville, and the earliest years of her relationship with Bobbie, she will be reminded of how not close the two of them were. Carly slept with Bobbie’s husband, Tony Jones (Brad Maule), and told more lies than she can recall. Bobbie forgave her. They both treated one another terribly for some time before reconciling their differences and paving the way for a lifetime of friendship.

Carly can’t help but question her own motives for keeping the secret about Nina and Willow, and she will wonder whether she’s doing it for the right reasons. Is she really protecting Willow? Does Willow need Carly to protect her? Is Harmony deserving of Carly honoring her wishes, and does Carly owe that woman anything after all she did? Ultimately, Carly will continue to stay silent on it for now, but as her own personal history with two moms starts to bubble up to the surface, she’s going to find it harder to justify keeping quiet about Willow’s.

Keep checking back with us for more GH spoilers and updates every day.