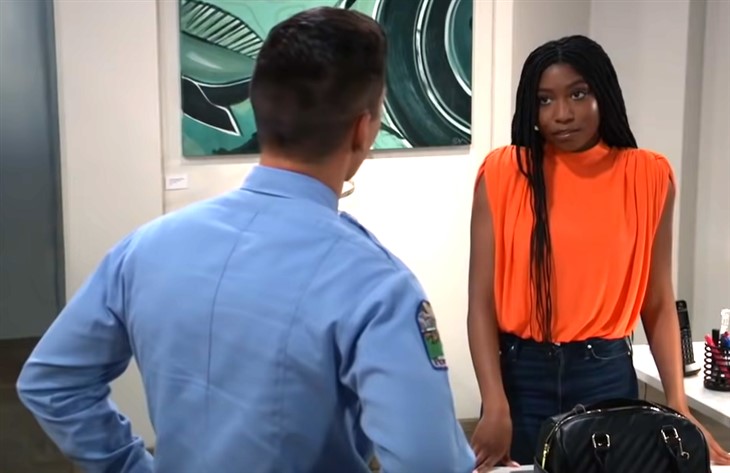 General Hospital spoilers and updates reveals Trina Robinson (Tabyana Ali) has been feeling less than secure about taking this couple’s trip with her boyfriend, Rory Cabrera (Michael Blake Kruse). Her gut instincts have been telling her it’s a bad idea, but she’s rationalized those internal whispers to herself as being some kind of weird PTSD she’s experiencing following the last trip she took out of town with Esme Prince (Avery Kristen Pohl), Josslyn ‘Joss’ Jacks (Eden McCoy), Spencer Cassadine (Nicholas Chavez), and Cameron Webber (William Lipton). Why is she sweating this trip so much? Is it really about Rory, or is it more about Trina herself?

Fans are chomping at the bit on this topic in recent weeks. It seems many viewers think Rory is just too saccharine sweet to possibly be the real deal. They’re expecting him to turn on Trina and reveal an ugly side of himself she never sees coming. Does Rory really have some secret agenda against Trina that he’s going to unleash as The Hook on their trip away together? Probably not.

General Hospital Spoilers: Cody’s Real Interest In Britt is Anything But Honorable

GH Spoilers – Indicate Trina Robinson Is Out Of Her Mind

There is a secret lurking in Port Charles though. Portia Robinson (Brook Kerr) knows it intimately. She’s been hiding the truth for nearly two decades that Trina is not really Marcus Taggert’s (Réal Andrews) daughter, but Curtis Ashford’s (Donnell Turner). Ever since Portia found out Curtis’ father — Marshall Ashford (Robert Gossett) — was diagnosed with Schizophrenia in his younger years, she has been vigilant and concerned that Trina could be predisposed to it.

Well, it just so happens that Trina may be out of her mind. If she is blacking out and behaving outside of her normal character, it’s possible no one who knows her better than that has caught on to that yet. Is Trina having Schizophrenic experiences that have led her to lose time and attack people as The Hook? If she is, how will Portia feel when she finds out and knows she may have been able to do something to prevent the attacks had she been honest about Trina’s ancestry?

General Hospital Spoilers: Joss Keeps Cam In The Dark, Is Their Relationship Over? https://t.co/rxzaXOc9Re #GH #GeneralHospital

Unfortunately, rumor has it Rory isn’t going to survive his attack from The Hook when Trina turns on him. Their trip may not end neat and tidy though. While Trina leaves his body behind to be discovered, she may snap back to reality and have no idea what transpired — leaving her looking for her boyfriend along with everyone else back home, as though he’s missing. Stay tuned for more GH news, updates, and spoilers!