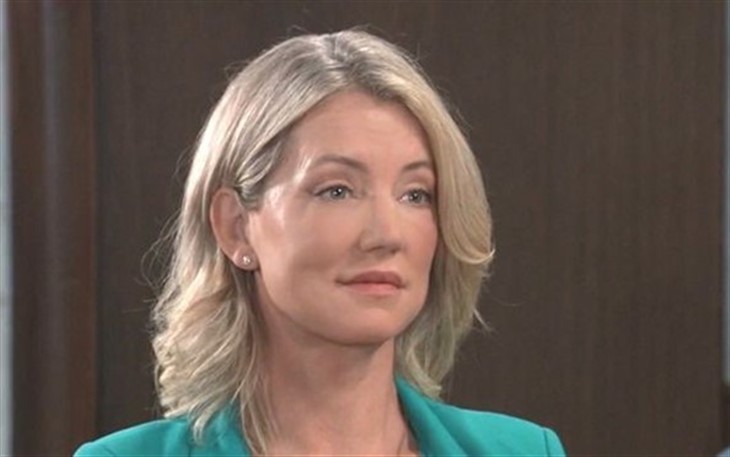 General Hospital spoilers and updates tease that Nina Reeves (Cynthia Watros) may be in for a big shock when Carly Corinthos (Laura Wright) returns from Jacksonville with Drew Cain (Cameron Mathison). Carly seemed to have a life-changing experience when Peyton Honeycutt (Linda Purl) unexpectedly asked for her forgiveness and she gave it to her; might a new Carly forgive Nina?

Making peace with her past in Jacksonville, Florida and her high school best friend’s mother seems to have made a profound change in Carly’s heart; she mentioned to Drew changing herself. Carly and Drew had been talking about her years with Sonny Corinthos (Maurice Benard) and possibly losing the Corinthos moniker and becoming her own woman, but this is real change. Possibly Carly saw herself and how she’s treated Nina in how Peyton had previously treated her and it made her feel guilty and knows she needs to make peace with Nina.

Carly and Nina were friends before Sonny disappeared and wound up in Nixon Falls, but it was the death of Nelle Benson (Chloe Lanier) and Carly keeping secrets that changed things. If Carly hadn’t kept secret her knowledge that Nelle had been Nina’s birth daughter, Nina wouldn’t have kept secret that Sonny was alive.

General Hospital Spoilers: Cody’s Real Interest In Britt is Anything But Honorable

GH Spoilers – Thinking About The Future

Carly and Drew will come home thinking about the future, with part of that appearing to be a future together, but she will also make a major decision. They’ll return to a Port Charles with some changes since before they left, with a serial killer prowling and some good friends in danger. That may also bear on Carly’s thinking about the future as she’s realized life is too short to let grudges go on forever. She may think about how Nina would have given her half of her hotel back with no strings attached and how her pride wouldn’t let her accept Nina’s kindness. That major decision may involve trying to make amends with Nina and asking her forgiveness as well as offering hers.

Whether Carly will decide to reveal the secrets she knows about Nina having another daughter in Port Charles may take longer. For one thing, she’ll have to ask Drew his forgiveness for not telling Nina and Willow Tait (Katelyn MacMullen) what she knows, because she’d made a promise to him. Revealing that secret would be more complicated now, because Willow hates Nina and so does Michael Corinthos (Chad Duell); but if she explains Drew why, he should understand.

Carly didn’t take her promise to Harmony Miller (Inga Cadranel) on her deathbed lightly, and that was why she sneaked that DNA from Willow and Nina to be sure. Drew should be understanding and forgive her for keeping that secret, although with Willow’s dire condition, it may have to be revealed soon.