Days Of Our Lives Spoilers: Halloween In Salem Is As Crazy As Usual 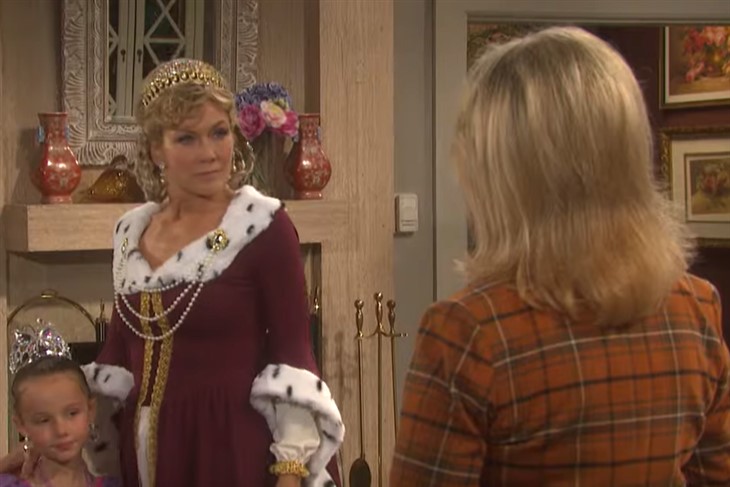 Days of Our Lives spoilers reveal Eric Brady and Nicole Walker deciding to take their relationship to the next level.

Days Of Our Lives Spoilers – A Spooky Time In Salem

It’s Halloween in Salem and we all know what that means. Come Friday, we won’t know what is real and what is not and that can be both amusing and confusing. On the one hand, we have Kristen DiMera (Stacy Haiduk) moving in with Brady Black (Eric Martsolf), John Black (Drake Hogestyn), and Marlena Evans (Deidre Hall), which we know is real. But we also have her putting on a maid outfit as well as an old Victorian dress, which doesn’t seem quite right.

Steve Johnson (Stephen Nichols) and Kayla Brady Johnson (Mary Beth Evans) have a pirate thing going, which could be their costume or it could be a fantasy. Again, with a DAYS Halloween, we just never know. Heck, there is even a sadistic-looking clown hanging out at a window.

Gabi Hernandez (Camila Banus) just knows there is something more going on with Stefan O. DiMera (Brandon Barash) than meets the eye, so she visits Dr. Wilhelm Rolf (Richard Wharton) and asks him what is going on. When Rolf is less than forthcoming, she just takes one of his scalpels from his lab and holds it to his throat. That gets Rolf to admit it was Li Shin (Remington Hoffman) who wanted Stefan brainwashed.

Of course, he fails to mention Kristen’s part, but that is neither here nor there. Knowing Lin was behind this can make Gabi vengeful and ready to fight but in her own scheming way. Gabi doesn’t take manipulation like this lying down and we can see her planning a whole wedding to Li and then dropping a bomb on him before they are pronounced man and wife.

How long will it take for Stefan to realize what is really going on? Stream new episodes of Days of Our Lives weekdays on Peacock starting at 6 AM EST to see how these stories play out.