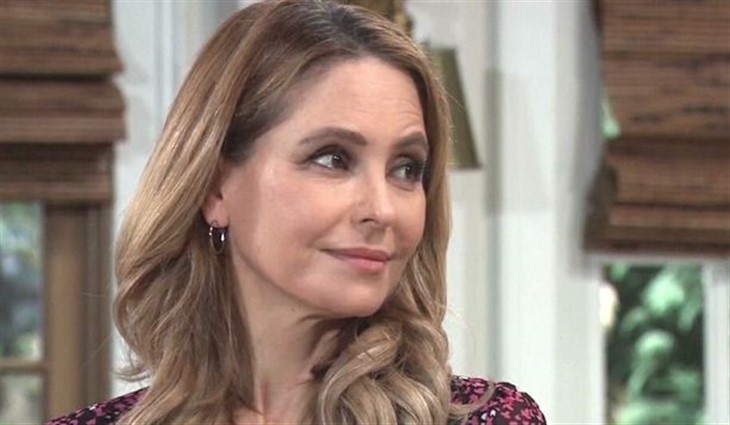 General Hospital spoilers tease that Nina Reeves (Cynthia Watros) is adapting quite well as the new co-owner of the Metro Court. Olivia Falconeri (Lisa LoCicero) is furious that she has to work with Nina. When Carly Corinthos (Laura Wright) ran into unexpected financial difficulty, she had to sell her half of the hotel. She thought she would be in a position to buy back her stake in the hotel but that didn’t happen.

Nina bought Carly’s half of the hotel and claimed that she planned to give it back to Carly. But Carly wouldn’t accept anything from her nemesis. She still hates Nina for keeping Sonny Corinthos (Maurice Bernard) from his family when he had amnesia and lived in Nixon Falls. Nina and Sonny also began a romance with the amnesiac mobster. And although Sonny regained his memory eventually, his feelings for Nina didn’t disappear.

Olivia owns the other half of the hotel and was mortified when her good friend Carly lost the hotel. Olivia dislikes Nina as well because of her lies and has made it clear that she will never trust Nina. That means that their partnership is destined to fail. If Nina won’t let Olivia buy her out, Olivia may decide to sell her own half! Valentin Cassadine (James Patrick Stuart) has been happy to focus on ELQ in recent months but he may be looking for a new challenge!

Although their romance didn’t work out, Nina and Valentin are still very close. If he decides to take on a new challenge, it would be a huge relief for Nina. She and Valentin will certainly make good business partners and might just take the Metro Court to new heights. It is also possible that working so closely together could bring their old feelings back for each other. Although Nina is with Sonny at the moment, his mob ties may become a huge issue. Valentin and Anna have finally made love recently but his Cassadine ties and devious nature may end that romance as well. Nina and Valentin might once again become Port Charles’ newest power couple.

Will Olivia decide to sell her half of the hotel since Nina won’t budge? Is Olivia in the wrong for not even trying to work with Nina? Would Valentin make a better co-owner of the hotel? Anything can happen in Port Charles so stay tuned to General Hospital airing weekdays on ABC. And don’t forget to check back right here regularly for all your General Hospital news, information, and spoilers!