The Bold And The Beautiful Spoilers: Ridge Can Not Explain Himself – Brooke Broken By Love 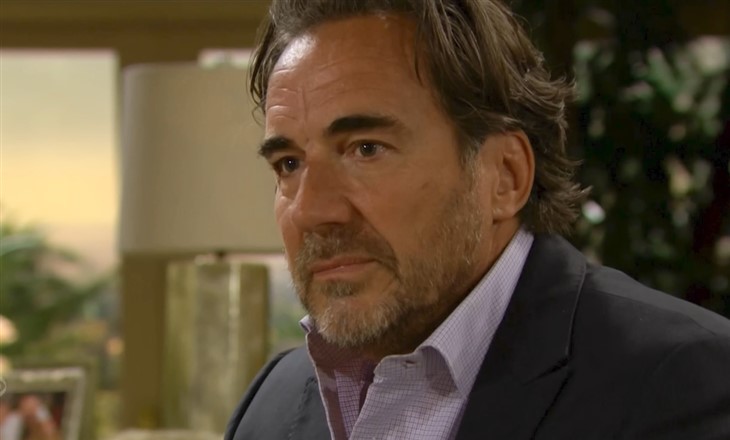 The Bold and the Beautiful spoilers document that Ridge Forrester (Thorsten Kaye) is teased to talk with Brooke Logan Forrester (Katherine Kelly Lang). The setting will be the Logan mansion.

Resplendent outdoor establishing shots are routinely shown before the well-known characters appear. The stark contrast between Brooke’s gorgeous property and Ridge’s cruel drop of his wife, along with the diabolical scheme Thomas Forrester (Matthew Atkinson) engineered, is intense.

Brooke remains in the dark. Ridge’s actions are perfectly logical when considering what he thinks he knows. But Lang’s character is baffled by her beloved husband’s sudden turn against her.

The Bold And The Beautiful Spoilers: An Unexpected Marriage Proposal-Sheila Proposes To Deacon?

The Bold And The Beautiful Spoilers – Keeping The Plot Going

Ridge could not explain himself to Brooke. If he did that immediately after learning of her apparent report to Child Services, then she would have the ability to challenge the perceived evidence.

Normally, Ridge explores every aspect of whatever drama Brooke has provoked. But the current twist has Ridge choosing to think that Brooke is incapable of admitting the truth. He feels it unnecessary to discuss the matter, thinking she is dishonest.

But Brooke is not responsible for what happened. Thomas’ decided to target his stepmother for takedown and has succeeded. His efforts are not impenetrable, with him holding digital evidence that could cause his plot to unravel during any episode.

The thought of Taylor Hayes (Krista Allen) being with Ridge does not add up in Brooke’s mind. She knows that Allen’s character is surface sweet. But underneath, Brooke believes Taylor is simply conniving.

The many times that Brooke has been married to Ridge is seen as goofy by many. But in Brooke’s mind, the volume purely reflects the wonder of their love. Ridge complied to that belief until recently as well.

Taylor was written back from her missionary work in Africa to make this storyline happen. But the power of Brooke and Ridge’s connection is currently off-line.

The Bold And The Beautiful Spoilers – Ridge Forrester Had Enough Drama

Ridge gave Brooke plenty of leeway through the years. He has not been an angel but also has not committed nearly the number of unforced errors Lang’s character has through the decades.

Taylor is Ridge’s main antidote to Brooke. But whether the good doctor can retain her hold on Kaye’s character is fully questionable because of their son’s sham on B&B.