Days Of Our Lives Spoilers: Will Kristen Get Brady Drunk And Rape Him Like She Did Eric? 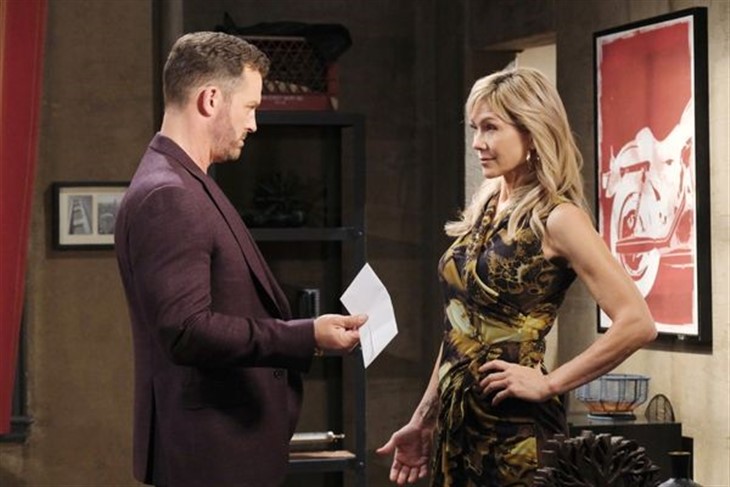 Days of Our Lives spoilers and rumors tease if Kristen DiMera (Stacy Haiduk) is desperate enough, she could force Brady Black (Eric Martsolf) to consummate a remarriage. Years ago, she was the reason for Eric Brady (Greg Vaughan) being kicked out of the priesthood the first time, by getting him drunk and raping him.

Days Of Our Lives Spoilers – Nothing Too Low

Eric’s history with Kristen shows there is nothing to low that she won’t try to get her way, and no depths to which she won’t stoop. It’s bad enough she’s playing the cougar, because Kristen is actually old enough to be Brady’s mother; she changed his diapers as a baby. Blackmailing Brady to dump Chloe Lane (Nadia Bjorlin) and save Marlena Evans’ (Deidre Hall) life and Kate Roberts’ (Lauren Koslow) and Kayla Johnson’s (Mary Beth Evans) was pretty lowdown as well.

Days Of Our Lives Spoilers: Halloween In Salem Is As Crazy As Usual

Desperate Kristen wouldn’t care if she had to kick alcoholic Brady off the wagon to get her way with him either. She was desperate enough to have her Phoenix tattoo removed and impersonate Nicole Walker-Hernandez (Arianne Zucker) to get him in her bed a few years ago, rape would be nothing.

DOOL Spoilers – Vodka With A Splash Of Aphrodisiac?

Vodka is a go to for many alcoholics who want to disguise that they’re off the wagon, since it’s clear like water. As long as no one smells it they’re okay, and no one would put it past Kristen to disguise vodka with a splash of aphrodisiac to trick Brady into drinking it. Such a cocktail would serve two purposes, getting him drunk and excitable and easy to seduce; of course she’d get him to a hotel first. Plots like hers are a bit difficult to carry out in a person’s parents’ house, especially with his father the spy; John Black (Drake Hogestyn) is keeping an eye on her. Kristen wants a real reconciliation with Brady, with all the bells and whistles.

Days Of Our Lives Spoilers – There May Be No Other Way

A marriage with no wedding night would be much too easy to annul, so Kristen won’t go for that with Brady. When she said the three of them, meaning he, her and their daughter Rachel Black (Finley Rose Slater) were to be a family she meant it in the realest sense. Kristen will likely force Brady to consummate their relationship and force him to the wedding altar as well, she won’t settle for anything less.

He knows if he doesn’t comply with her wishes that she will withhold the orchid serum, and he can’t let Marlena and the others die. But if all he wants to do with her is play house, she’ll have no problems getting him drunk and having her way with him.