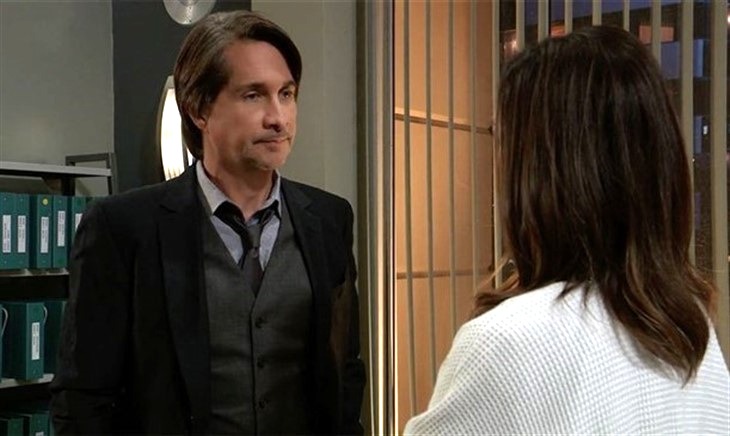 General Hospital spoilers reveals Hamilton Finn (Michael Easton) has been enjoying life — for the most part — since he found love again with Elizabeth Webber (Rebecca Herbst). While Hayden Barnes (Rebecca Budig) hasn’t made it easy for Finn, leaving him with Violet Finn (Jophielle Love) to raise on his own, he’s found that “Aunt Elizabeth” has made a fantastic supplement in their lives.

But Finn’s newfound love and life with Liz doesn’t negate the special bonds he formed in the past — especially the one he shares with Anna Devane (Finola Hughes). He’s going to remind her of that in the coming days.

Anna is a busybody. She’s used to being on the go and chasing down leads. The woman barely sleeps on a regular basis and we never see her take time for a meal. She hasn’t much time to visit her daughter or grandchildren anymore, because WSB business is never done. As one can imagine, it’s not going to be easy for a woman like this to sit in a jail cell passing time, without so much as a clock to stare at.

Anna would welcome company from most anyone at this point, but a friendly face is much preferred. That being said, most of her closest friends are fellow investigators and members of law enforcement, and she really needs them to focus all of their energy on clearing her name and finding Lucy Coe (Lynn Herring). So, when a familiar friend from the not-so-distant past stops by, she’s going to relish every moment of their visit.

Finn has moved on with Elizabeth and found that dynamic that keeps their blended family happy, and Anna has found her perfect work and life partner in Valentin Cassadine (James Patrick Stuart). Will Finn be able to stem Anna’s angst and anxiety long enough to provide her some relief?

Despite their romantic past, Anna and Finn are just friends now and more than happy to be just that. So it won’t be awkward when Anna opens up to Finn about her love for Valentin and how concerned she is that he and Charlotte Cassadine (Amelie McLain) may be in serious trouble.

When Anna loops Finn in on her worries about Victor Cassadine’s (Charles Shaugnessy) involvement, he may even offer to try to help in some way, but Anna knows Finn has a full plate with Violet, the boys, and Elizabeth’s haunting memories. Still, she might not be in a place to turn down help right now. Stay tuned for more GH news, updates, and spoilers just ahead.

General Hospital’s Charles Shaughnessy Weighs In On The Victor-Valentin…