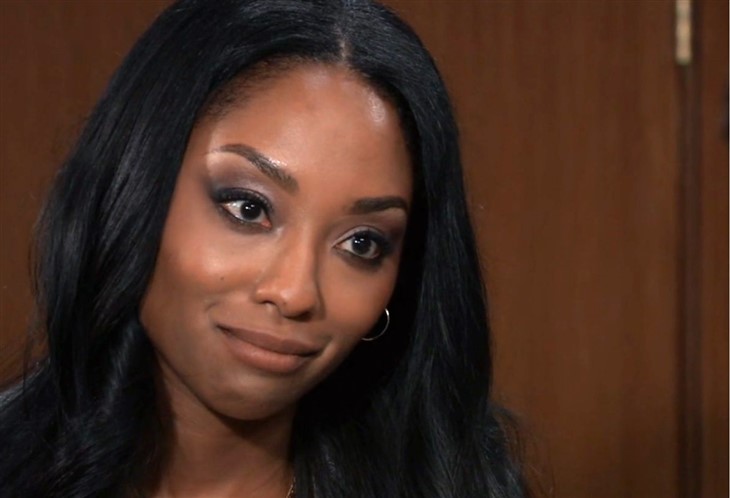 General Hospital spoilers reveals Jordan Ashford (Tanisha Harper) is growing very tired of watching Portia Robinson (Brook Kerr) keep her ex, Curtis Ashford (Donnell Turner) in the dark. If Curtis is Trina Robinson’s (Tabyana Ali) father, he deserves to know the truth. The longer Portia waits to unravel her two-decades-long lie, the more Jordan feels it’s her duty to pressure her to do so — and Portia is just about over it.

Jordan and Curtis have both signed their divorce papers and sent them off to be reviewed and inked by a judge. The day they can officially say they are no longer a married couple is drawing near, and that’s important because Curtis is trying to marry Portia as soon as possible. The lovebirds are anxious to put this whole mess behind them and start their lives together as husband and wife, but a black cloud has been looming over Portia’s happily ever after for weeks now.

Ever since Jordan confronted Portia about Curtis being Trina’s father — and Portia didn’t deny it — a clock has been ticking figuratively in their minds and putting an enormous amount of pressure on both women. Jordan feels pressure to make sure Curtis doesn’t end up in another marriage built on lies. Portia, on the other hand, feels pressure to make Jordan shut up already. She had no intention of ever telling Curtis the truth and certainly doesn’t want to now that they are so close to walking down the aisle.

GH Spoilers – Suggest Portia Hasn’t A Leg To Stand On

Of course, Portia may not get what she wants if Jordan has anything to say about it. Now that the cat is out of the bag, there’s no putting it back in. Unless Portia can come up with an equally painful way to coerce Jordan to keep her mouth shut, she’s going to have to tell Curtis the truth — or live with Jordan breathing down her neck about it at every turn and risk never making it to her own wedding day. Portia isn’t in the driver’s seat anymore. Her big, bad lie has a new driver, and it’s the worst person it could possibly be: Curtis’ ex-wife who likely still loves him.

This begs the question: if Jordan does still love Curtis, is she going to tell him the truth in an attempt to score herself a second chance with him? How can she be certain Curtis would even end his relationship with Portia because of this lie? Might it backfire in Jordan’s face if she’s the one to tell him? Knowing Curtis as well as she does, Jordan suspects he won’t marry Portia knowing she kept this lie from him. However, he’s going to share a child with Portia forever, and they will be tied together whether any of them like it or not. Could that be Portia’s saving grace that keeps Curtis in her orbit? Stay tuned to find out, and keep checking back with us every day for more GH news, updates, and spoilers.