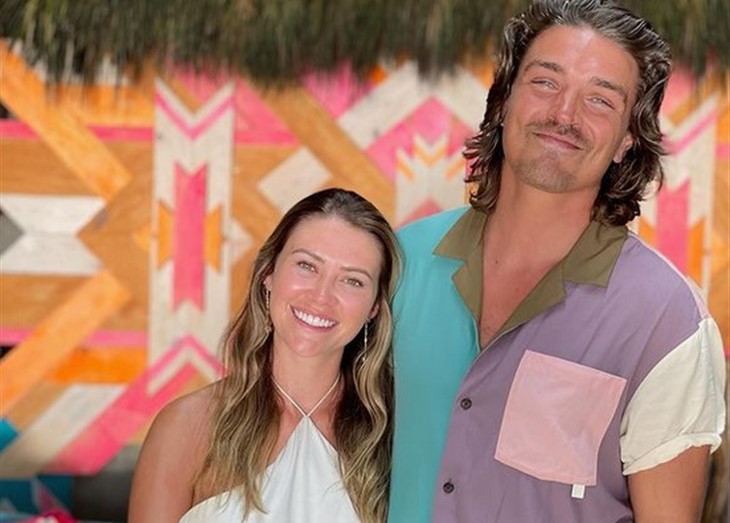 Bachelor In Paradise fans began to despair that Dean Unglert would actually ever propose to Caelynn Miller-Keyes. In fact, she talked about having to do the proposal herself. Meanwhile, Dean acted as if the fact that they had promise rings was just as good as being married. Now that they finally became engaged, fans reacted to the news.

Dean Unglert shares something in common with ABC star, Dale Moss. Both of them enjoy extreme adventures like swinging off buildings or jumping out of hot air balloons. Actually, Dean had a lot more experience. The funny thing is that Caelynn giggled when she shoved him off the hot air balloon on the anniversary of their split. Recall, he dumped her on the island on her birthday. These days, she can laugh about it. But at the time, it seemed all was over.

The Bachelor In Paradise couple became firm favorites with ABC fans when they adopted their little rescue pooch. Unfortunately, Pappy passed away and they took on another doggie. Determined to give the pups good golden years, fans felt they were ready to tie the knot. Earlier this year, Caelynn decided to give up and propose to Dean herself.

On October 27, Dean took to his Instagram account and shared some photos of him on his knee on the beach. Geotagging it as Nā Pali Coast, Kauai Island, he wrote, “under promise. over deliver. 😈” Then he said that their engagement date was on October 24. Colleagues, friends, and fans sounded overjoyed!

Bachelor In Paradise star Wells Adams commented early on. He recently married as well. In his reply, he posted, “😍😍😍😍😍😍😍.”

Then Kristin Haggerty wrote, “EPIC PROPOSAL, EPIC COUPLE ❤️ love you both so much!! Cheers to forever!!”

Lots of similar comments arrived and of course, ABC fans also reacted to the good news.

Bachelor In Paradise fans were not going to be left out of the conversation. One of them wrote, “You hiked the na Pali coast and then proposed 😩🥹🥰 so cute.”

Another commenter noted, “I never comment on social media, but I truely love watching your relationship grow! You two are the real deal! Cheers to a wonderful life together! ❤️🔥👏”

Are you happy that the couple finally decided to formalize their engagement? Are you shocked that Dean finally proposed so Caelynn Miller-Keyes didn’t have to? Let us know your thoughts in the comments below.

Be sure to catch up on everything happening with The ABC cast. Come back here often for more Bachelor in Paradise spoilers, news, and updates.