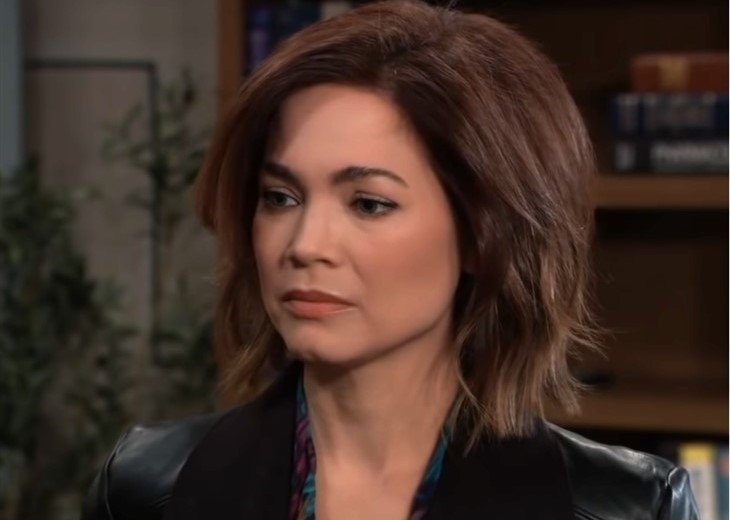 General Hospital spoilers reveals Elizabeth Webber (Rebecca Herbst) has traveled a long way to her childhood home in California in hopes that just being there and walking through the hallways of yesteryear would help her unlock more memories and piece together the scattered bits she can’t seem to shake from her conscience. Will Elizabeth’s trip unearth a tragedy she’ll never be able to forget again? Will she wish she hadn’t pushed to make sense of any of it? Where will this revelation leave things with Elizabeth and her parents — namely, her father?

Thus far, the only real facts she has are that she sees herself arguing with a woman at the top of a flight of stairs and insisting that the woman stay away from her father, Jeff Webber (William R. Moses). Another piece of the puzzle involves seeing who she presumes is the same woman at the bottom of that staircase, clearly having fallen down it. Only recently did she discover the woman was Reiko Finn (Mele Ihara).

Elizabeth thought her only knowledge of Reiko was that she was once married to her boyfriend, Hamilton Finn (Michael Easton), and she died from Blackwoods Disease. New but imperfect and spotty knowledge of Reiko’s past intersecting with her own has Elizabeth deeply concerned she may have done something to Reiko, and she doesn’t know how she would ever explain that to Finn.

It’s fairly clear from the memories Elizabeth does have that Reiko wasn’t just Finn’s late wife. She was a woman who was somehow involved with Elizabeth’s father. Jeff and Reiko both worked overseas often. It’s possible that their paths crossed, but it hasn’t made sense to Elizabeth why she would have blocked out these memories of Reiko until now.

Was her father having an affair and Elizabeth’s psyche just couldn’t handle the pain and anguish of knowing he cheated on her mother or was there more to it? Could Reiko have been Jeff’s lovechild with someone else – making her Elizabeth’s half-sister? Was Reiko possibly Jeff’s second child with Heather Webber (Alley Mills) whom she claimed to have miscarried before she was institutionalized?

The conversation between Elizabeth and Jeff won’t be awkward for very long. Some part of him might even suspect she’s there because of Reiko. Has Jeff had an interest in what Liz is up to ever since she coupled up with Finn? Interestingly, that was around the same time he and Carolyn Webber (Denise Crosby) started reaching out to Jake Spencer (Hudson West) via email to check in on the boys and their mother.

Whatever Jeff is about to tell Elizabeth, it’s going to send her head spinning, and it won’t be as easy for her to share the truth with Finn as it was for her father to unburden himself unto her. Still, although Elizabeth hadn’t seen her father in more than two decades and has held significant repressed anger and upset toward him for neglecting her when she was young, she’s going to recognize that he only did what he thought was best for everyone. Will she be able to move past it?