General Hospital Spoilers: Laura Must Forge A Difficult Alliance To Protect Her Loved Ones 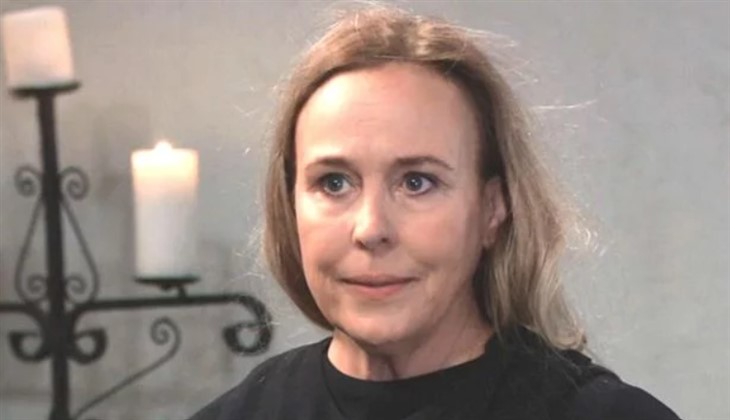 General Hospital spoilers reveals Laura Collins (Genie Francis) hasn’t had an easy year. She’s been burned by her new half-brother, Cyrus Renault (Jeff Kober). Her daughter, Lulu Falconeri (Emme Rylan) is still in a coma. Her grandson, Spencer Cassadine (Nicholas Chavez) is serving three months in Pentonville. Her mother just lost her home in a fire and it’s taken Laura out of town to assist her. The latest devastating news is going to bring the Mayor back to Port Charles and ready to come at anyone who dares to threaten another member of her family. However, it’s unlikely Laura knows at this juncture the depths she’ll have to go to keep everyone safe.

Valentin Cassadine (James Patrick Stuart) is stuck in Switzerland watching his daughter like a hawk. Ever since Victor Cassadine (Charles Shaugnessy) put the distance of an ocean between Valentin and Charlotte Cassadine (Amelie McLain), Valentin didn’t know if he would ever see his mon petit again. Faced with a one-time offer to go see her, he couldn’t pass it up, despite knowing in his gut that Victor had something else planned.

General Hospital Spoilers: Victor Is Onto Ava And Nikolas’ Act

He never imagined the plan would involve framing Anna Devane (Finola Hughes) for murder. Valentin is now facing a tough decision: does he leave Charlotte behind and head back to Port Charles to help save Anna, or does he potentially forsake his lady so he can stand watch over Charlotte and keep her safe? Valentin may need to call on Laura — as Charlotte’s grandmother and as the Mayor of Port Charles — to see to it that neither of the ladies in his life are forsaken due to the other.

GH Spoilers – Indicate Cyrus Renalt Is Waiting For Her

One of the toughest aspects of solving the crime Anna allegedly committed is that no one knows where Lucy Coe (Lynn Herring) is. Victor has planned this well to make it look like Anna is guilty. Where is Lucy? Who was that woman on the pier? Is Alex Devane (Finola Hughes) alive? If so, where is she hiding?

Laura knows Victor is behind all of this, but proving it within the letter of the law is going to be difficult, if not impossible. Meanwhile, her half-brother Cyrus has been waiting for just the right opportunity to get back into his sister’s good graces. Could it be the last thing Laura ever wanted from Cyrus before — involvement in his criminal world — is the first thing she comes calling for now? Will the reformed Christian man Cyrus has become extend his help to his sister if it means dabbling in a world he thought he left behind to do it?

Ultimately, this battle is going to land on Laura’s doorstep, and she’s always known that. From the second Victor came out of hiding alive and well, and returning to Port Charles where he said he wanted to make amends with his family, she knew he had a more sinister plan. Victor is aware Laura is no fool though. He knows she’s not just going to let him tear her family apart without a fight, and he’s counting on her to bring it. Could the entire scheme be, in part, to lure Laura into a trap where she too meets her fate? Who would be framed for that murder? Keep watching General Hospital every weekday on ABC, and check back with us often for more GH news, updates, and spoilers!