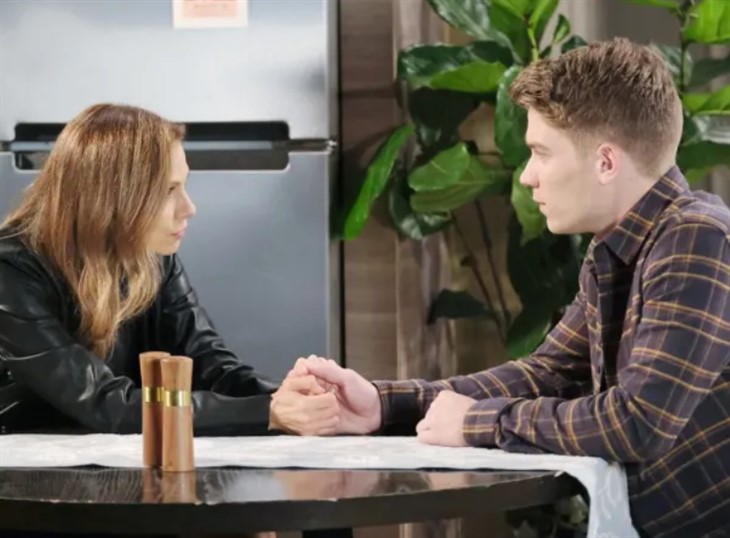 Days of Our Lives spoilers and updates tease that EJ DiMera (Dan Feurreriegel) will want to turn the tables on Ava Vitali (Tamara Braun) after Susan Banks’ (Stacy Haiduk) horrifying ordeal. Once he finds out Ava’s behind his mom’s kidnapping, he might send someone to kidnap Tripp Johnson (Lucas Adams).

Ava will panic when she finds out that Tripp is in danger, and she might regret not leaving town to stay with him in Seattle. It makes sense for EJ to cause the danger for Tripp, after Ava is discovered to be the one who hired Xander Cook (Paul Telfer) to kidnap Susan. Susan will have had a terrifying kidnapping with Xander dragging her off chloroformed right in front of Anna and Tony DiMera (Leann Hunley, Thaao Penghlis) who’ve just arrived home.

Days Of Our Lives Spoilers: Tony And Anna Pulled Into Dimera Drama As Search For Rolf Ensues

They don’t see his face, they just see her being hauled out the door and his head is turned away. She’ll be found by Bonnie, Justin and Alex Kiriakis (Judi Evans, Wally Kurth, Robert Scott Wilson) in a closet in the Kiriakis mansion basement.

DOOL Spoilers – Steve And Kayla Johnson To The Rescue

Of course, when Ava realizes Tripp is in danger she won’t be able to just let it slide without telling his birth father Steve Johnson (Stephen Nichols). He and Kayla Johnson (Mary Beth Evans) will go on an adventure trying to rescue Tripp and Joey Johnson (Tanner Stine) may be involved as well.

But until that time, EJ may milk the situation for all it’s worth short of revealing himself as Tripp’s kidnapper, it’s likely he sends someone else to do his dirty work. EJ could even work with Orpheus (George DelHoyo) whose location remains elusive; and he’s not anywhere near done with his own revenge since someone seems to be interfering with it. EJ will want Ava to experience the terror that his mother did when she was missing, plus his own fear and worry for her.

Days Of Our Lives Spoilers – Driven Over The Edge

Ava will seem to be driven over the edge, and may indeed go over the edge since the Fall Preview shows scenes that haven’t yet materialized. Ava is driving a car and EJ is driving another in clips showing Susan screaming in a closet in the middle. It looks like Ava and EJ both swerve but is one of them trying to drive the other off the road?

Ava has recently been visited by her dead son Charlie Dale (Mike C. Manning) who has been coaching her in her revenge against EJ. Whose car will crash over the edge and who will get the real revenge in turn for Tripp’s kidnapping-Ava, or EJ?