The Bold And The Beautiful Spoilers: Brooke Hopes For Her Future – Liam Fears Tomorrow 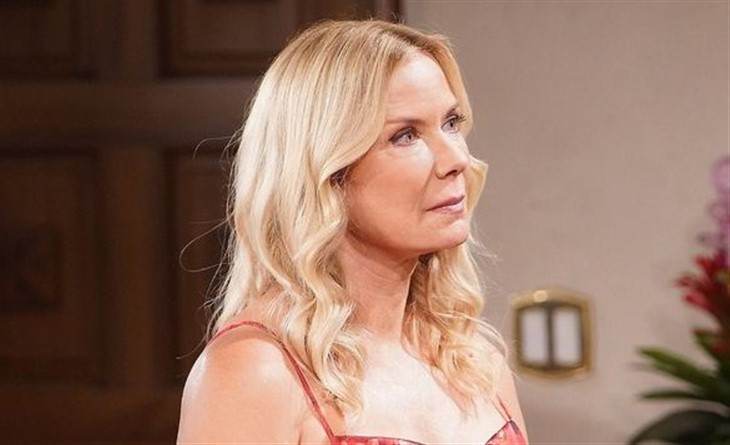 The Bold and the Beautiful spoilers document that Brooke Logan (Katherine Kelly Lang) still believes that the love of her life will return. Bill Spencer (Don Diamont) hopes Brooke’s future is with him instead.

Brooke’s stance is based on the illogical manner in which Ridge Forrester (Thorsten Kaye) ended their eighth marriage. He did not explain leaving Brooke so he could remarry Taylor Hayes (Krista Allen).

Liam Spencer (Scott Clifton) has been fully supportive of his mother-in-law. But he has problems in his marriage that must be dealt with before Thomas Forrester (Matthew Atkinson) wrecks it.

The Bold And The Beautiful Spoilers: Hope’s Conflicted Heart, Thomas And Liam’s Love

The Bold And The Beautiful Spoilers – Ridge Forrester Has No Faith

Ridge pledged his love to Brooke when he remarried her in 2018. This most recent reunion was based on Ridge telling Brooke he had forgiven her past transgressions.

Devoted fans know Ridge endured the many dramas Brooke created through the decades. But fans also recall that Ridge is no saint.

In addition to claiming to want to look forward, Ridge also said that they needed to be open with each other before problems arose. There appears to be wiggle room in that statement because Ridge has reacted after he thinks he learned that Brooke reported Thomas to the authorities.

Brooke is putting a lot of faith in perceived destiny. She may need to wait for an indefinite period before Ridge comes to his senses.

But Brooke does not have the information she needs to respond to what Thomas did. She has no idea that her distrusted stepson used a voice-altering smartphone application to file a false report, where he reported himself for endangering Douglas Forrester (Henry Joseph Samiri).

Thomas has retained the faux recording, which implies it will be discovered. But there is no way to know if that will happen soon enough to prevent the annulment from going through or before Ridge and Taylor remarry.

The Bold And The Beautiful Spoilers – Liam Spencer Must Take Action

Hope prevented Thomas from kissing her at the Forrester mansion after the successful fashion show. Liam did not know it, but his wife followed through on his hope that she recognizes and blocks Thomas’ latest attempt to woo her.

The Bold And The Beautiful Spoilers: Brooke Agrees To Quit – Bill Ready To Replace Ridge

However, strained feelings grew between Liam and Hope because he has been pressing her about Thomas. Atkinson’s character may have reached a tipping point. Yet, the drama in this storyline does not seem like it is over on B&B.