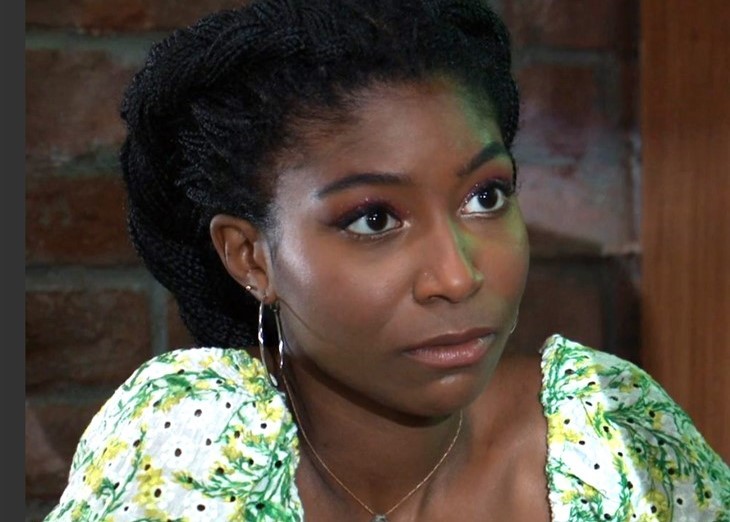 General Hospital spoilers and rumors tease that Trina Robinson (Tabyana Ali) will get some eye-opening information soon. Might she accidentally come across some information and find out her DNA doesn’t match Marcus Taggert’s (Réal Andrews)?

Curtis Ashford (Donnell Turner) was recently concerned about the possibility of inheriting his father’s schizophrenic markers and had genetic tests done. This is what Portia Robinson (Brook Kerr) wanted to get done with Trina, but the genetic counselor wouldn’t give her results when she submitted some of Trina’s DNA. Portia had hoped to find out if Trina had schizophrenic markers knowing that Curtis is her real father but didn’t want either Curtis or Trina to know he is.

Trina practically worshipped the ground Marcus walks on since she was a little girl. Portia knows it would change things dramatically for Trina, not to mention for Marcus, and Curtis receives a clean test back.

Portia of course is relieved for Curtis, because if his results are clean then maybe they wouldn’t filter down to Trina, and Trina herself is happy for Curtis. But to her, Curtis isn’t her dad and she’s been quite resentful of his overprotection, preferring for her dad Marcus to be her protector. Trina’s been downright furious that Curtis talked her mentor, Ava Cassadine (Maura West) into firing her and getting her a job offer at the prestigious Chuck art gallery.

Trina understands that she and anyone connected to her could be targets of the Hook attacker, but she thinks Curtis way overstepped. But there is another person concerned with the truth of Trina’s paternity and that is Jordan Ashford (Tanisha Harper) who’s warned Portia that Curtis doesn’t like secrets, and that’s a doozy.

Portia thinks that Trina and Curtis will never have to know that they are father and daughter, and that Marcus and Trina will never have to know that they’re not. It’s true that Jordan should just let sleeping dogs lie and not interfere in this secret, but she won’t, because she figured it out and told Portia she knew. Marshall Ashford (Robert Gossett) worried to Jordan that her ex-husband Tommy Ashford (uncast) suffered from the disease, but she explained he had post-traumatic stress disorder, a different disease.

Jordan and Portia talk about Curtis’ test coming out clean and how Portia doesn’t have to worry about Trina. Trina overhears and demands answers, is she saying Taggert’s not her father, because why else would she worry about her getting the Ashfords’ schizophrenia?