Days Of Our Lives Spoilers: Heartbroken Rafe Reacts To Nicole’s News, She’d Rather Be With Eric 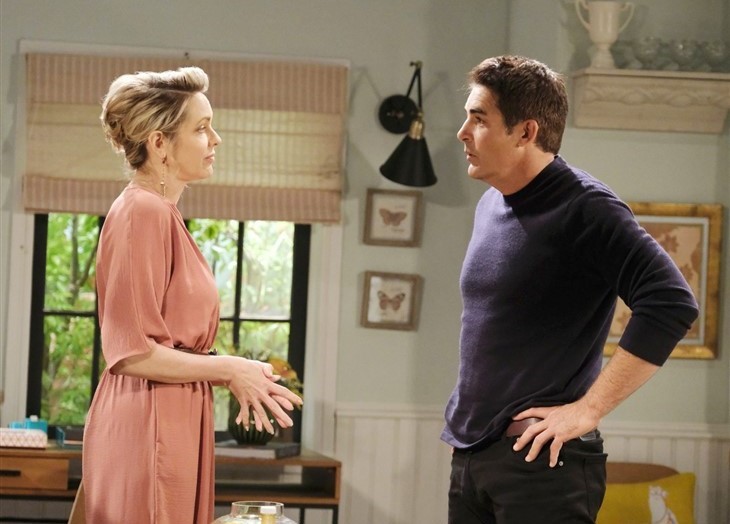 Days of Our Lives spoilers and updates tease that a heartbroken Rafe Hernandez (Galen Gering) will react to Nicole Walker-Hernandez’ (Arianne Zucker) news but won’t be really surprised. Nicole finally comes clean and admits that she’d rather be with Eric Brady (Greg Vaughan).

Days Of Our Lives Spoilers – No Big Surprise

Even from the start of their relationship, once it started getting serious, Rafe had his doubts that Nicole was really ready to commit. Just as they were talking engagement, suddenly Eric reappeared in Salem back from Africa for good this time, having been dismissed from the priesthood. Rafe kept prodding Nicole to make sure that she was ready to move on with him before they took the step of marriage.

Then one day she just wanted to move forward very quickly, perhaps a bit too much so. That was a red flag that she was moving forward with him to prove to herself she was over Eric, or maybe just to get over Eric.

DOOL Spoilers – Hoping His Detective Skills Were Off

Rafe could tell that his and Nicole’s rather short marriage was already at the beginning of the end, although he was hoping that in this case, his detective skills were off. His young rookie Jada Hunter (Elia Cantu) had some excellent points that Nicole was way too interested in her relationship with Eric to not be jealous. Rafe is heartbroken, but angry and frustrated at the same time even though the truth has been staring him in the face. He knew something was going on and he tried to moderate his jealousy, allowing her and Eric to work together at Basic Black. He’d feared that being in a situation like she was when their romance first started, her model, him photographer would cause something like this and he was right.

Fears become tears as Nicole admits she married Rafe to get over Eric and it didn’t work, and replacing one person with another never does.  Rebound relationships never work either, because the people bring way too much baggage in. Rafe and Nicole’s marriage had come to the point of no return in a relatively short time, even though their relationship had started slowly.

They both regretted hurting Ava Vitali, (Tamara Braun) who he’d been involved with as his and Nicole’s attraction grew. Nicole and Ava had been friends as well and they fought their feelings as long as they could; what else can they say now except karma strikes hard!