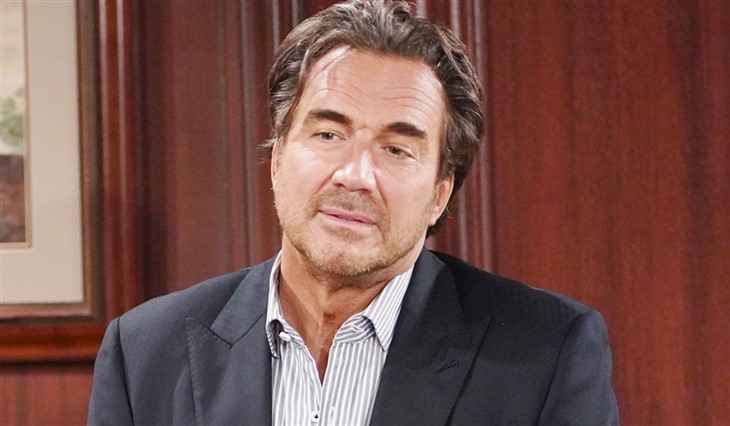 The Bold and The Beautiful spoilers and updates tease that newly engaged Ridge Forrester (Thorsten Kaye) will be confronted by Steffy Forrester Finnegan (Jacqueline Macinnes Wood). She’ll demand answers from her waffling prone father and promises he won’t waffle back to Brooke Logan (Katherine Kelly Lang) again and break her mother’s heart.

The Bold And The Beautiful Spoilers – What Really Happened In Aspen

Steffy tells Ridge about what really happened in Aspen and why she and Taylor Hayes (Krista Allen) went there to look at Bill Spencer’s (Don Diamont) house. Ridge remembers he had a hard time convincing Taylor to listen to him and that she had been frustrated with him. Steffy tells her Taylor was going to buy the house in Aspen and relocate there because Ridge seemed so non-committal.

The Bold And The Beautiful Spoilers: Will Douglas Rat Out Thomas?

Ridge knows most of that already but that’s why he went there, to keep Taylor from walking away. That’s also why he is in a hurry to marry her and was in a hurry to get an annulment from Brooke.

B & B Spoilers – Promises, Promises

Steffy remembers there have been plenty of promises never to waffle back to Brooke again when Ridge and Taylor were together. But Steffy also has been stung by the pain of a waffling husband, all those times that Liam Spencer (Scott Clifton) waffled back and forth from Hope Spencer (Annika Noelle). That makes Steffy doubly sensitive to what her mother has been through and also doubly sensitive to how the Logan women keep claiming men who aren’t theirs.

Steffy well remembers her late grandmother Stephanie Forrester’s (Susan Flannery) tales about Brooke, and how she ran after Ridge when she was working for a caterer who catered his engagement party. She was determined to marry Ridge and when he wouldn’t cooperate she went after Eric Forrester (John McCook); Stephanie didn’t give her that nasty nickname for nothing!

The Bold And The Beautiful Spoilers – A Pre-Nup Needed

Steffy thinks a pre-nup is needed to make sure that Ridge won’t be seduced away by Brooke from Taylor, and she pushes the idea on her mother. Taylor doesn’t agree and thinks their daughter is being more than just a little bit pushy and tells her to calm down. She tells her they are already planning their wedding for next week, and doesn’t see how Brooke could possibly tear Ridge away that quickly.

She thinks that Ridge is plenty convinced and committed that they belong together or he wouldn’t be pushing for the wedding in record time. As for Brooke, she signed those annulment papers and why wouldn’t she have fought it legally if she wasn’t resigned to giving him up-that’s not like Brooke.