Days Of Our Lives Spoilers: Li’s Frantic Fretting, Will Wendy Blow Up Secret? 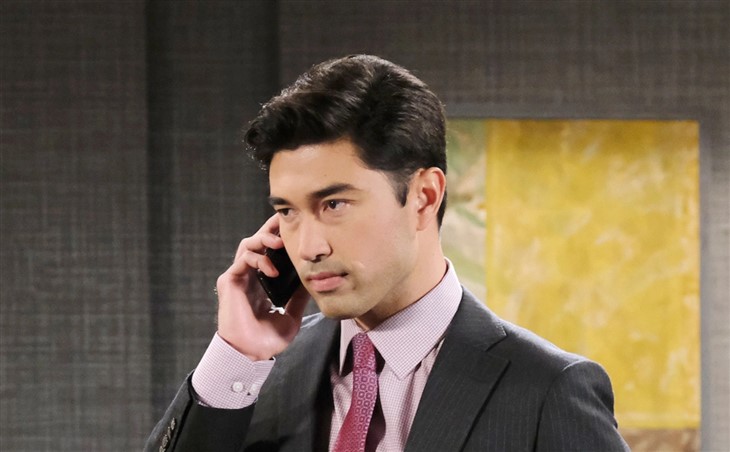 Days of Our Lives spoilers and updates tease that Li Shin (Remington Hoffman) will frantically fret. He’s worried that little sister Wendy Shin (Victoria Grace) is onto him, and she’ll blow up his secret!

Days Of Our Lives Spoilers – A Trip To Jakarta

Li finds out that Wendy, with Johnny DiMera (Carson Boatman) have tracked Dr. Wilhelm Rolf (Richard Wharton) to Jakarta, and are looking for his new lab. Stefan DiMera (Brandon Barash) also reported Wendy was in his office appearing to be looking at the laptop, saying she had been looking for Gabi Hernandez (Camila Banus). Stefan had brought her up to speed and they introduced themselves to each other, and knowing that Johnny is at odds with his father EJ DiMera (Dan Feurreriegel) Li’s worried.

Days Of Our Lives Spoilers: Creepy Visions Of Charlie Haunt Ava, But Is He Real?

Li has plenty to be worried about – he was in cahoots with Rolf and Kristen DiMera (Stacy Haiduk) to bring Stefan to life but also to brainwash him. He came to life forgetting everything except his hate for Gabi, and Li cannot afford to let that secret come out.

Li contacts Rolf and gives him a heads-up about Johnny and Wendy, giving him instructions on how to handle them when they arrive, as well as when to expect them. He concocts a reasonable cover story that he thinks Wendy will believe, and it should make sense to Johnny as well. But Li underestimates his little sister and how crafty she can be, he also vastly underestimates her hacking skills. By the time they find Rolf in Jakarta, Wendy is three if not several more steps ahead of her brother back in Salem. Wendy knows Li underestimates her skills, that’s why she was stuck in a field office in Alaska instead of being at DiMera Corporate where she wanted to be.

Days Of Our Lives Spoilers – A Struggle In The Lab

Wendy and Johnny arrive in Jakarta and find Rolf’s so called secret lab with no trouble at all. They hope to convince Rolf to spill the tea about what Li and he are really working on and ask specific questions about the brainwashing of Stefan. They don’t buy the cover story and pretty soon, the situation escalates, and escalates quickly.

Days Of Our Lives Spoilers: Creepy Visions Of Charlie Haunt Ava, But Is He Real?

Rolf, Johnny and Wendy soon become embroiled in a physical struggle and they are determined to shake Rolf up a little bit, and his secrets out of him as well. Rolf reaches for a syringe, thinking he’s going to make them forget what happened but Johnny comes at him from the front while Wendy comes at him from the back!