Days Of Our Lives Spoilers: Tony And Anna’s Desperate Logic, How Far Will EJ Go? 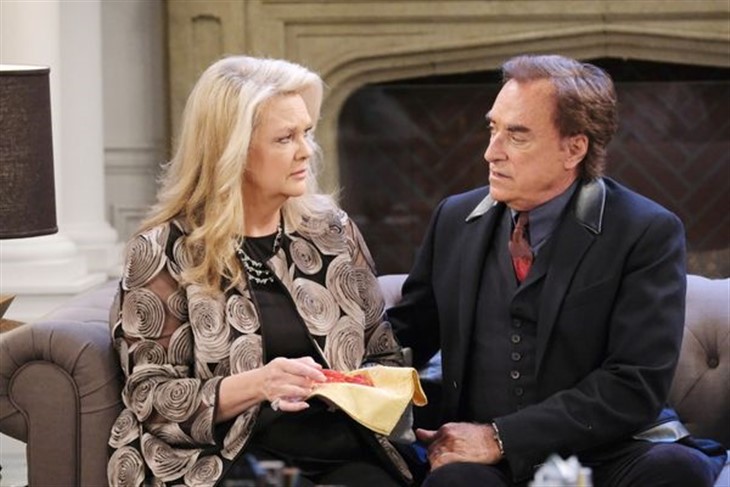 Days of Our Lives spoilers and updates tease that Tony and Anna DiMera (Thaao Penghlis, Leann Hunley) will try to talk some sense into EJ DiMera (Dan Feurreriegel). They’re desperate to convince him he’s not acting logically having Tripp Johnson (Lucas Adams) kidnapped; how far will he go before he gets his kidnapped mother killed?

Tony already tried convincing EJ to just pay Ava Vitali (Tamara Braun) the ransom she demanded to set Susan Banks (Stacy Haiduk) who she’d had kidnapped free. Tony was right when he described Ava as unstable, although she’s actually way off the deep end. She’s taking advice from her dead son Charlie Dale (Mike C. Manning) who visits her in the DiMera crypt, who she appears to be hallucinating.

Ava has Steve Johnson (Stephen Nichols) and Kayla Johnson (Mary Beth Evans) looking for Tripp after EJ texted her a photo of Tripp with a gun to his head. But now she’s in revenge mode and nothing will stop her from putting a bullet in Susan’s head, and EJ won’t listen to reason.

DOOL Spoilers – No Amount Of Convincing Changes His Mind

No amount of logic or convincing will change EJ’s mind, as now he is in revenge mode and bent on forcing Ava to release Susan by threatening to kill Tripp. Tony and Anna keep telling him Ava will kill Susan before his henchmen kill Tripp, but it’s turned into a power struggle. How does he know, reasons Anna, that Susan isn’t already dead, shouldn’t EJ request proof she’s alive before taking any further retaliatory action? A photo from a cell phone would be something, it would show a date and time stamp, or a video, something. Tony tries to reason with EJ, telling him he agrees with Anna; before going one step further they need proof of Susan’s survival.

Days Of Our Lives Spoilers – A Bull In A China Shop

Bulls in china shops usually cause a lot of damage, and EJ’s acting just like one; Tony and Anna continue to try to convince him to think things through. They say if Susan dies because of EJ’s mishandling of the situation, his mother’s blood will be on his hands, not Ava’s. But EJ is not thinking clearly, he’s thinking through feelings of rage; Tony had to physically restrain him from strangling Ava when she came to the mansion.

But with EJ in this kind of state, it’s his way or the highway, and he’s already committed a felony by having Tripp kidnapped. He’ll lose everything if he goes off half-cocked to find and rescue his mother himself, he could lose Susan and his law career.