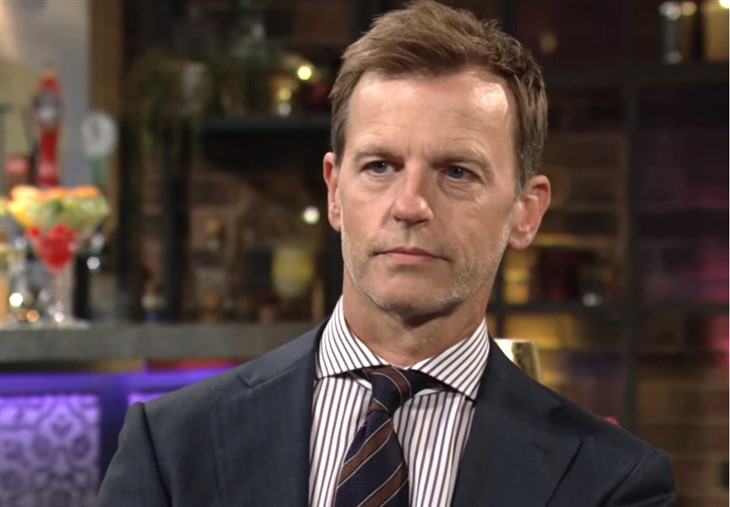 The Young and the Restless (Y&R) spoilers tease that Tucker McCall (Trevor St. John) wants to take down the Abbotts and Newman by a hostile takeover of Jabot and Newman Enterprises. It’s a bold move and will require Tucker to have several moles in the companies to feed him information.

On Tuesday, November 15, Tucker told Audra Charles (Zuleyka Silver) that she needed to get as much information on Jabot as possible. He realized her position limited the financial documents she could see, but he still felt she could find helpful information.

Tucker revealed to Audra that Nate Hastings, Jr. was now at Newman Media. The way he said it suggested that Nate was part of Tucker’s plan.

The Young And The Restless Spoilers—Tucker McCall Still Wants Ashley

Since his return to Genoa City, Tucker has wanted to rekindle a romance with Ashley Abbott (Eileen Davidson). Even though he wants to acquire Jabot, he still believes he could make it work with her.

Part of his plan is to fire her brother, Jack Abbott (Peter Bergman), and place Ashley as CEO. He [falsely] believes that if he dangles the CEO position in front of Ashley, she will betray her brother.

Ashley has been playing nice with Tucker. He may assume that she is starting to fall in love with him, but Ashley will be a tough cookie to break. She knows he is up to something and is only cozying up to him to get more information.

Y&R Spoilers  — Nate Hastings Could Be A Problem

Even after the heartbreaking betrayal, Victoria Newman (Amelia Heinle) trusts Nate and gives him Sally Spectra’s (Courtney Hope) job as CEO of Newman Media. It’s a move that will indeed cause some tension, especially after Tucker suggested Nate was working with him.

If Nate is working with Tucker, his job would be to find out information on Newman Enterprises. It shouldn’t be difficult for him as he is the CEO of Newman Media. As a bonus, Victoria seems to blindly trust Nate, giving him an edge to find out whatever information Tucker needs.

It’s shaping into an action-packed storyline that the Y&R viewers won’t want to miss. This site is a leading source for everything linked to The Young and the Restless. Check back regularly for Y&R spoilers and news!