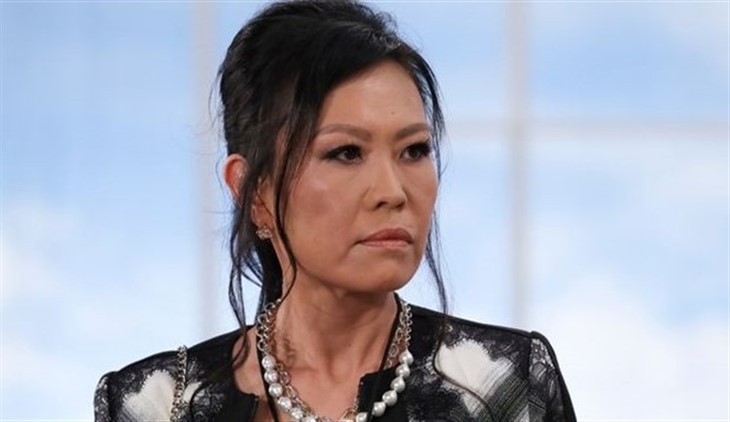 General Hospital spoilers tease that Gladys Corbin (Bonnie Burroughs) has tried her best to support Sasha Gilmore (Sofia Mattsson) after her son Brando Corbin’s (Johnny Wactor) death. Gladys agreed to become Sasha’s conservator, meaning that she has control of all of Sasha’s funds. This was done after Sasha committed several crimes while under the influence of drugs. The conservatorship was created to keep Sasha out of prison.

Gladys reintroduced herself to Selina Wu (Lydia Look), calling herself a fellow investor of Selina’s in Deception. Gladys made it a point to tell Selina that she has control of all of Sasha’s fortune. Selina’s ears perked up and she immediately invited Gladys to her high-stakes poker games which are held at the Savoy. Selina provided Gladys with the secret password needed to get into the exclusive games. Gladys seemed extremely interested, but she hid the card when Sonny Corinthos (Maurice Bernard) showed up and interrupted their conversation.

GH Spoilers – Gladys Corbin Is Still The Same Person She Always Was!

Gladys has come a long way from the person she was when she first came to Port Charles. Gladys used her connection to Sonny to try to make easy money. But as she grew closer to Brando and even Sasha, Gladys seemed to soften. But Gladys is still the same person she always was deep down. Her only way into the poker games is with Sasha’s wealth so look for her to use her daughter-in-law’s money for her own ends.

Sonny is well aware of Gladys’ shortcomings and he told Sasha to let him know if Gladys does anything, not in Sasha’s best interest. But if Gladys gambles away Sasha’s money, he may not find out about it until Sasha is broke. But look for this to be the beginning of the end of Sonny’s dealings with Wu. In fact, this could very well be the start of a brand-new mob war. And it’s not a given this time that Sonny will win, as Selina has been consolidating power and wealth in Port Charles for months now.

Was Gladys a good choice to be Sasha’s conservator? Will Gladys gamble away Sasha’s fortune? Can Sonny step in before it’s too late? Anything can happen in Port Charles so stay tuned to General Hospital airing weekdays on ABC. And don’t forget to check back right here regularly for all your General Hospital news, information, and spoilers!