The Bold And The Beautiful Spoilers: Ridge Walks Out On Taylor During The Wedding—Runs Into Brooke’s Arms 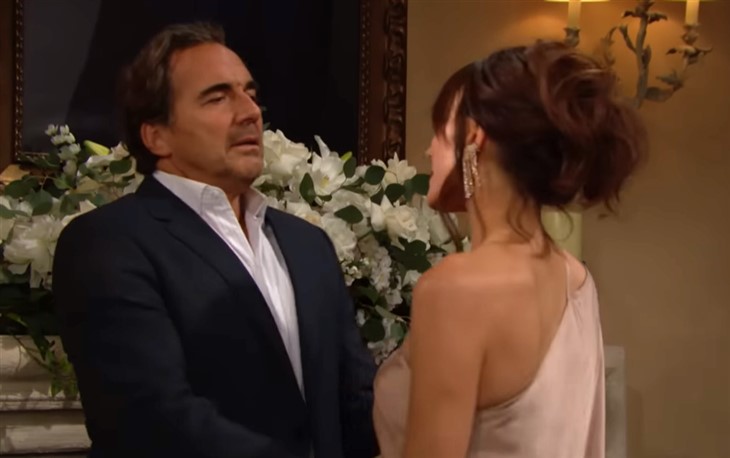 The Bold and the Beautiful (B&B) spoilers tease that Ridge Forrester (Thorsten Kaye) will need to decide what he wants when he learns the truth about the fake CPS call. He will have to decide if he really wants to be with Taylor Hayes (Krista Allen) or if he wants to salvage his relationship with Brooke Logan (Katherine Kelly Lang).

The Tridge wedding will begin on Friday, November 18. Taylor is a blushing bride, excited about her life with her children’s father, Ridge. She wants the day to be perfect, as any bride does. She doesn’t know that Thomas Forrester’s (Matthew Atkinson) big secret will come out, which could change her life.

Thomas has been able to keep a lid on the CPS secret. But that will soon change. There are too many people in the loop, some that just don’t believe Brooke is capable of such a devious act.

The Bold And The Beautiful Spoilers: Thomas Forces Douglas To Celebrate engagement– Secret Is About To Explode

Steffy Forrester (Jacqueline MacInnes) believes Thomas’s story. She said that Brooke has always hated them, and the CPS call is the proof. Of course, Thomas reinforced her opinion, saying Brooke wanted to take Douglas Forrester (Henry Joseph Samiri) from him.

The only person that doubted Thomas’s story was Eric Forrester (John McCook). He just didn’t believe Brooke would call CPS. Ridge defended Thomas, stating he heard Brooke’s call, confirming that it was indeed her voice. Even so, Eric remained unconvinced.

The B&B spoilers state that the scoop comes out during Ridge’s wedding to Taylor. At this point, we don’t know how the secret comes to light, just that it does. Ridge will leave his wedding, still in his tuxedo, to tell Brooke what he’s learned.

The B&B viewers know that the story will stun Brooke. She will swear she never made the call, which Ridge will see that she’s telling the truth. The spoiler picture from Soap Opera Digest showed Ridge in Brooke’s bedroom with his tie dangling around his neck. It looked like they were in a heated conversation.

It’s clear that Thomas will earn a few enemies in the next few days. Let’s just hope he doesn’t lose custody of Douglas over his poor judgment and need to remove Brooke from his father’s life.

B&B fans, do you think Ridge will marry Taylor? This site is a leading source for everything linked to The Bold and the Beautiful. Check back regularly for B&B spoilers and news!