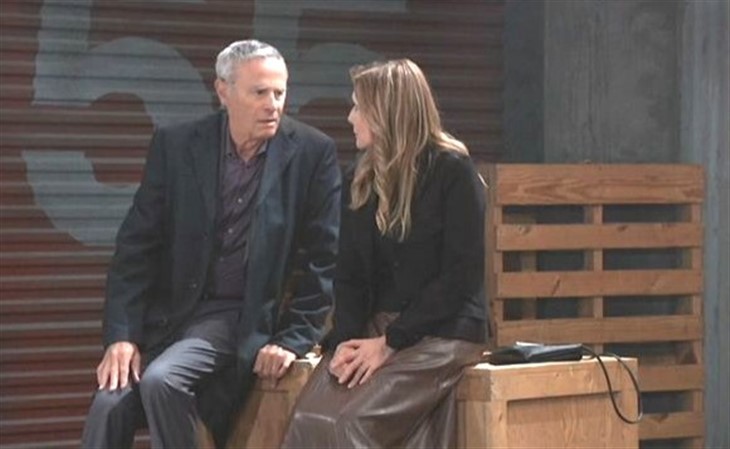 General Hospital spoiler tease, when Holly Sutton (Emma Samms) spontaneously appeared in the Quartermaine boathouse, Robert Scorpio (Tristan Rogers) was full of enthusiasm and joy over her return. The dust has settled now though, and every time Robert spends time with Holly, he’s left with more questions about her behavior. He can sense Holly is holding back from sharing the truth about the last two years of her life with him, but he doesn’t want to push her before she’s ready to open up. Why is Robert suddenly so soft?

Robert’s conversation with Anna Devane (Finola Hughes) about rejoining the dating world couldn’t have come at a better time. Just as Robert was ready to dip his toes back into the waters of love, his former flame came rushing back to him. Still, while he’s eager to see if they can find their way back to one another, he’s bothered that Holly seems to be pulling away at every turn.

Why doesn’t Holly feel like she can be herself around Robert? Who is this woman that has returned to him, and what happened to her to make her this way? As Robert goes round for round with himself assuming he’s endured some kind of trauma, Holly is going to take his heart for everything it’s worth — even if she hates herself for it.

Although Holly is working for Victor Cassadine (Charles Shaugnessy), she’s only doing it because he’s got her over a barrel. Victor has managed to capture someone else Holly loves, and apparently they’re more important to her than everyone else back in Port Charles. Who it is will really determine whether Robert, Anna, and the rest of the gang can ever forgive Holly for forsaking them and their trust in her.

Given that he’s hoping for their late-night kiss in the Metro Court hallway to end up as much more, Robert is going to feel stifled that Holly isn’t letting him get any closer to her. Sure, they’re spending time with one another, but she’s putting on a good show — and he can tell.

The next time Robert presses Holly for information and she starts to clam up, he’s going to call her out. It may just be all the frustration he’s been eating bubbling up to the surface, but Holly will become acutely aware of just how bothered Robert is that she hasn’t been upfront. Will this change her perception of him just as much as it alters how Robert sees Holly? Keep checking back every day for more General Hospital news and spoilers as they become available to find out.