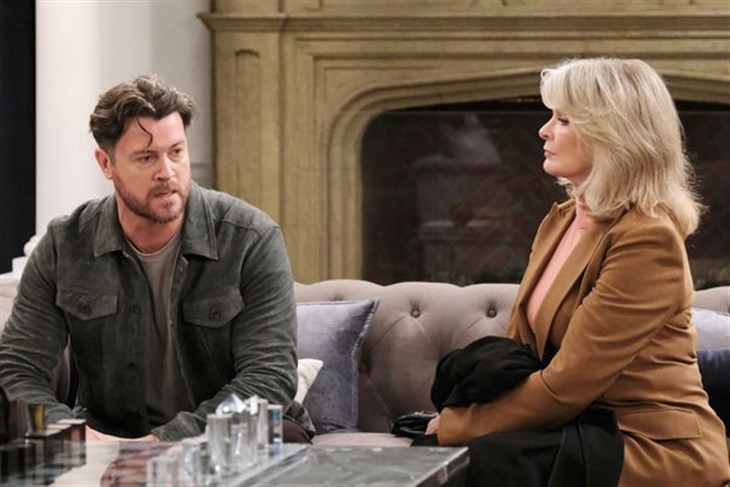 Days of Our Lives spoilers and updates tease that Marlena Evans (Deidre Hall) will try to comfort a devastated EJ DiMera (Dan Feurreriegel).  EJ saw the car Ava Vitali (Tamara Braun) was driving with his mother Susan Banks (Stacy Haiduk) in the back plummet down a cliff and explode.

Days Of Our Lives Spoilers – He Couldn’t Have Predicted It

Marlena is grieving the likely death of Susan as well but she tells EJ he could not have predicted what was going to happen. Ava must have been suicidal to just suddenly veer off the road in that manner and off a cliff, and even she is shocked about the kidnapping. She should have released Susan and taken the money and ran instead of taking her along with her, it makes no sense why she would do that.

EJ claims Ava has been unstable for quite some time now, but that doesn’t help his grief; he doesn’t understand how anyone could have survived what he saw. Marlena agrees, but trying to figure out what happened doesn’t change things.

DOOL Spoilers – He Hasn’t Even Changed

EJ has been up all night, he couldn’t sleep after the horrific sight he saw, and he had tried to get to the wreck himself but was unable to. First responders were called, but the car was so engulfed in flames that they couldn’t get near it until the fire died down, and they pulled him back. The car had incinerated so completely that there was literally nothing left, not even anything resembling burnt bones, according to the reports that came afterwards. Marlena cautions him that there can be a very thin line between hope and false hope, and it would be better to accept death. It would be horrible to hope for survival and be proven wrong at a later time; even if it doesn’t seem like closure.

Even Dr. Wilhelm Rolf (Richard Wharton) wouldn’t be able to help if there is nothing left he could work with – EJ was brought back but that was different. He tries to avoid thoughts of his mother burning to death but remembers his own years of recovery, deciding perhaps what happened is a mercy. Marlena agrees that she likely died upon impact and didn’t feel anything, burn victims can take years to heal and it’s very painful.

The grief and the loss won’t go away overnight and Marlena cautions EJ not to rush through the process. She says to not blame himself because he can’t go back and change it; what he can do is contact her boyfriend and siblings so they’ll hear it from him first.

Days Of Our Lives Spoilers: Nicole Pushes Jada To Get Rid Of The Baby, Eric Goes…