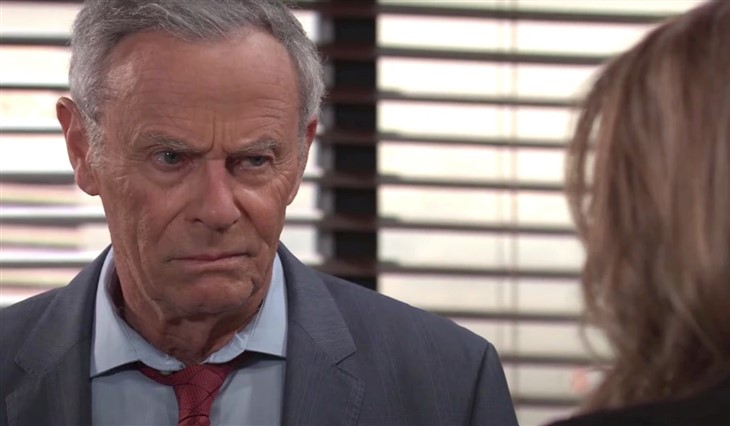 General Hospital spoilers tease Robert Scorpio (Tristan Rogers) is known for sticking close to the women in his life. His daughter Robin Scorpio Drake (Kimberly McCullough) and ex-wife Anna Devane (Finola Hughes) can attest to that. Just because a marriage doesn’t work out doesn’t mean the love is lost or that the relationship is over in Robert’s book.

So it’s not abnormal for Robert to feel protective of Holly Sutton (Emma Samms), or offended and frustrated because he feels like she’s lying to him. He’s been patient and hoped Holly would confess the truth to him in her own time, but the clock is running out on Anna’s freedom and safety — and Robert’s had enough.

Holly hasn’t been herself since she got back to Port Charles, but she can’t explain what’s bothering her to her friends without risking the wellbeing of someone else who means a whole lot to her. Victor Cassadine (Charles Shaugnessy) has someone Holly loves locked up, and he’s willing to do whatever it takes at their expense to manipulate Holly’s behavior however it best suits him. While we don’t know who that person is yet, reasonable guesses include her son Ethan Lovett (Nathan Parsons) or Luke Spencer (Anthony Geary).

As Holly continues to act nervous and jumpy around her friends, with little regard for figuring out what happened to her during the last two years of her life, they’re going to stop worrying that Holly is too fragile to answer the tough questions they want to ask.

While it seems as though Robert has been pretty cautious about pushing Holly to think about anything before she showed up on the shores of the Quartermaine property, he feels like her story is starting to grow stale. Laura Collins (Genie Francis) has raised some valid points about Holly’s behavior, and she even recently linked her to Victor. Robert didn’t balk. However, he knows Holly wouldn’t help Victor on her own volition — and that means Holly is in trouble. Robert needs her to shoot straight with him in order for him to help her. Will she though?

Victor has noticed Robert is catching onto Holly’s behavior recently. He’s also realized Laura knows more than she should. What Victor isn’t sure about is whether Holly is intentionally leading them back to him, or if she’s even gone all the way and confessed the truth to Laura and Robert. However, it’s always possible Holly’s friends know her far too well and she just can’t pass their sniff test. This storyline is about to blow up in a very big way. Keep watching GH every weekday on ABC and keep checking back with us for more GH news, updates, and spoilers to hold you over every night.