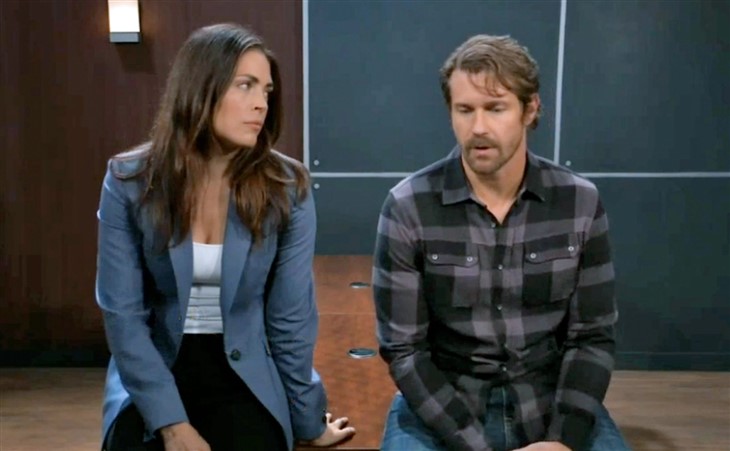 General Hospital spoilers reveals Britt Westbourne (Kelly Thiebaud) isn’t ready for what comes next. She’s certain that the symptoms she is experiencing and those of Huntington’s Disease and that the illness has finally come for her. If this is the beginning of the end, Britt would rather drown her sorrows with her bestie Brad Cooper (Parry Shen) and pretend everything is fine than admit what’s going on and open up to those who love her. However, she knows that’s not a realistic approach as her condition is going to worsen, and could rather rapidly. The people she loves deserve to be prepared for what is likely about to happen to her, but who does she start with?

Cody Bell (Josh Kelly) has been a pretty jovial character in Britt’s life. He’s upbeat most of the time, and the pair have connected on several fronts — especially how they feel about their family, or lack thereof. Britt and Cody might not have hit it off at first, but they’ve become friends, and both of them are definitely leaning in the direction of wanting something more.

We’ve yet to see how this will pan out when Britt discovers Cody targeted her from the beginning just to get access to the necklace Peter August (Wes Ramsey) left her. For now, he’s going to be doing his best to cheer her up while he’s convinced she is not as fine as she says she is. However, Britt won’t be up for comic relief the next time Cody tries to lift her spirits.

This secret is becoming too much to bear, which is obvious given how Britt easily opened up to Austin Gatlin-Holt (Roger Howarth) recently. Her symptoms are also becoming hard to hide, as is her mood each time they rear their head. Cody is going to keep prying out of genuine concern for Britt’s wellbeing, and she’s finally going to open up to him. Hearing about her diagnosis is going to leave Cody feeling rather hopeless, which isn’t something he’s felt since determining he stands to inherit a $35 million fortune. This is something that Cody can’t fix, no matter how much wealth he might attain. How will he help Britt handle this downward spiral in her health?

General Hospital Spoilers — Cody Bell Has A Softer Side

It turns out, Cody isn’t all that bad. That’s what Britt has come to realize anyway. It might have taken more than a few days, but she’s now going to bat for him with her own mother, Liesl Obrecht (Kathleen Gati) — who is going to see just how much Cody is willing to be there for Britt. He’s not getting anything out of it, and he’s still there. That will speak volumes to Liesl, and may change Scott Baldwin’s (Kin Shriner) opinion of him by default, too. As Cody comes to care for Britt while her health deteriorates, we just might find she gets the happily ever after she never thought she would — even if it is short lived. This storyline is going deep. Keep checking back with us every day for more GH news and spoilers — and bring your tissues.