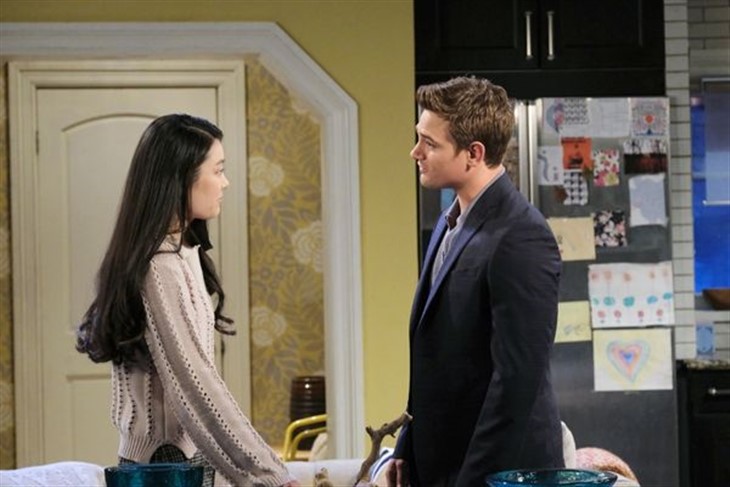 Days of Our Lives spoilers tease that Wendy Shin (Victoria Grace) and Johnny DiMera (Carson Boatman) are on a dangerous quest. Believing that Stefan DiMera (Brandon Barash) was brainwashed by Wendy’s brother Li Shin (Remington Hoffman), and Dr. Wilhelm Rolf (Richard Wharton) into forgetting that he was in love with Gabi Hernandez (Camilla Banus). Wendy and Johnny are absolutely correct and they embarked on a mission to Indonesia to locate Rolf and get a confession.

Days Of Our Lives spoilers – Danger Looms For Johnny DiMera and Wendy Shin!

With the help of Anna DiMera (LeAnn Hunley), Johnny and Wendy discovered that Rolf was now in Indonesia. They took the DiMera private jet and quickly located Rolf. The plan was for Wendy to get Rolf to talk while Johnny recorded them. Unfortunately, they were captured by Rolf, who planned to erase their memories. Luckily, Wendy and Johnny managed to get the upper hand on Rolf before that could happen. Rolf destroyed the recording before they escaped so they still don’t have the proof they need.

DOOL Spoilers – Wendy Shin and Johnny DiMera may need to go into hiding!

Although they left Rolf incapacitated, he will free himself before long and get in touch with Li. While Li would never hurt his sister, he may try to detain Wendy and Johnny so they can’t reveal what they know. Although their proof was destroyed, Wendy and Johnny could keep Gabi from marrying Li if she even suspected the truth. Gabi herself was given a drug to forget that Rolf confessed to her as well so Wendy and Johnny could certainly trigger her memories.

Johnny and Wendy may need a place to hide from Lee and Rolf, so there is every possibility they may make a side trip to Seattle. Why Seattle? That is where Wendy met Joey Johnson (Tanner Stine). Joey has a crush on Wendy so look for him to jump at the chance to help her, even if it means helping Johnny as well. Like Joey, Johnny has also developed a crush on Wendy so look for the two men to try to one-up each other in order to impress her. But can Joey successfully hide them from Li and Dr. Rolf?

Should Wendy and Johnny just return to Salem? Or could Li have other plans for them? Will Joey save the day and impress Wendy? Anything can happen in Salem so stay tuned to Days of Our Lives streaming every weekday on Peacock. And don’t forget to check back right here regularly for all your Days of Our Lives news, information, and spoilers!