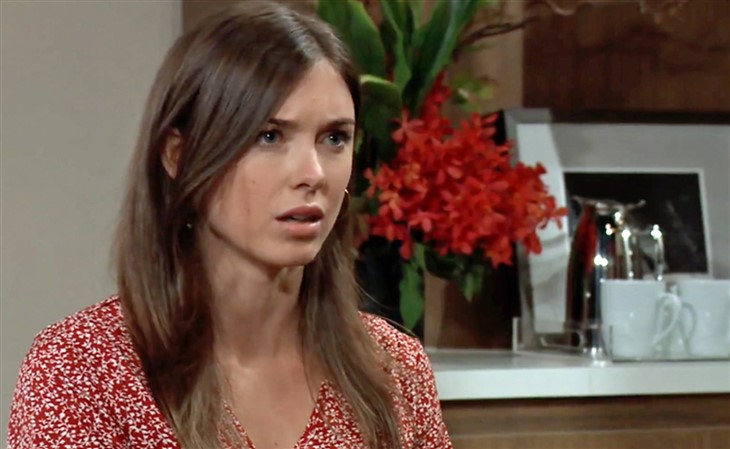 General Hospital spoilers tease Willow Tait (Katelyn MacMullen) has been battling leukemia for months, and until recently, only her doctors knew. Now that she’s opened up to Michael Corinthos (Chad Duell) about what she’s going through and the severity of the situation, she still wants to keep a lid on her diagnosis for a little while longer before they share the unfortunate news with their entire family. She is hopeful Wiley Corinthos (Viron Weaver) will never have to know she was even sick, and that the chemo treatments she has begun will get her fixed up in no time.

However, Willow has to be very careful not to expose herself to any additional stress. Her body is going through enough fighting cancer while being in the second trimester of her pregnancy. So when she gets into a heated argument with Nina Reeves (Cynthia Watros), it will shock everyone when Willow collapses and is rushed to the emergency room.

Nina just can’t stop ruffling everyone’s feathers as of late. First, she accused Willow of cheating on Michael with T.J. Ashford (Tajh Bellow). Then she tried to backpedal and apologize, but Willow wasn’t hearing it. She firmly told Nina to drop dead, and Nina hasn’t forgotten it. Now, Nina has opened her mouth once again to comment on Carly Spencer’s (Laura Wright) relationship with Brick (Stephen A. Smith), an associate of Sonny Corinthos’ (Maurice Benard). Sure, Carly can take care of herself, but Willow is going to go to bat for Carly just like Carly did for her. When Willow lays into Nina for not knowing how to mind her own business, the dispute will zap what little energy she has and leave her lying on the ground.

When Willow falls to her feet, Nina will be stunned. She might hesitate for a moment and not know what to do, but deep down, she is concerned about her grandson’s mother. As she immediately calls for help, Nina will talk to Willow and let her know she’s not alone, although Willow may not maintain consciousness. As she comes to in the emergency room, her team of doctors are going to have more bad news.

It’s only been a couple of weeks since Dr. Terry Randolph (Cassandra James) told Willow her cancer had progressed from stage II to stage IV. It took a lot for Willow to process that and acknowledge what it means since there is no stage V. Knowing it’s do or die time, quite literally, Willow is going to weep when the doctors tell her she needs the bone marrow transplant as soon as possible. How can she possibly speed up the search for her parents after all these years? Will Drew find her parents without Carly’s confession? Let us know what you think, and stay tuned for more GH news and spoilers just ahead.