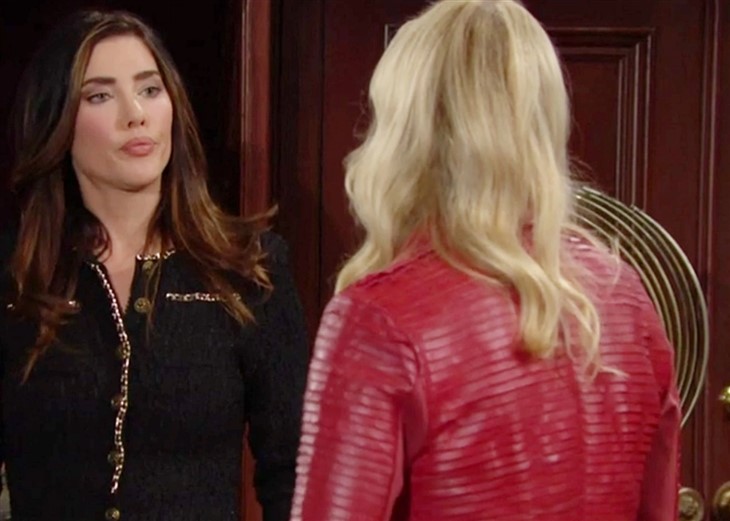 The Bold And The Beautiful spoilers indicate that it seems Steffy Forrester (Jacqueline MacInnes Wood) has jumped on the Brooke Logan (Katherine Kelly Lang) bandwagon. However, looks can be deceiving. Douglas Forrester (Henry Joseph Samiri) told Steffy what his father had done making her an accomplice to his lies. Steffy refused to keep Thomas Forrester’s (Matthew Atkinson) secret.

The Bold and The Beautiful spoilers reveal that Steffy was stunned when Douglas told her what Thomas had done. Steffy was even more shocked when Douglas played the recordings for her. Steffy is appalled by what Thomas did to Brooke but look what he did to their parents. Ridge would have never divorced Brooke if not for this lie. Now Taylor Hayes (Krista Allen) has to face the fact that Brooke did nothing wrong.

Steffy insisted their parents should know. As much as Thomas tried to get Steffy to keep quiet, she refused. Steffy also urged Taylor to tell Ridge Forrester (Thorsten Kaye) the truth. Steffy is furious that Thomas has forced his son to keep this secret for so long. Even Taylor says she cannot stand to look at Thomas knowing what he has done.

Several viewers aren’t wanting Steffy to speak up in front of everyone if Taylor doesn’t tell Ridge the truth. Of course, fans want Steffy to tell Ridge in private if he learns the truth. Taylor should be the one to tell Ridge what Thomas has done. Steffy cannot keep up Thomas’ lie now that Douglas has told her the truth. Will Steffy be forced to expose Thomas’ scheme?

If Steffy doesn’t make sure that Ridge gets the truth she would be just as bad as Thomas. After all, didn’t Steffy promise Douglas that she would fix this? Douglas doesn’t want Brooke to be hurt. Douglas needs someone to protect him from his father as well. Will Steffy keep her promise and protect Douglas from his father since he told her the truth?

Steffy has been right there beside Thomas badgering their parents to get back together. Steffy doesn’t believe that Brooke deserves her father and has made that plain time and again. However, Douglas being pulled into this may have given Steffy a reality check. How could Thomas possibly hurt his son like this?

What will happen now that Thomas has been caught up in this? Will Steffy get through to Thomas? Will Taylor be hurt worse because of Thomas’ lies? Was Steffy right to tell the truth about Thomas’ actions?