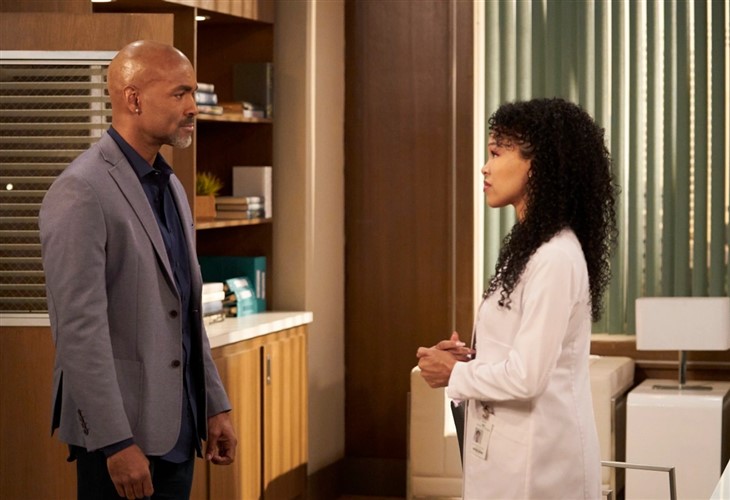 General Hospital spoilers reveals Curtis Ashford (Donnell Turner) has been excited to start planning his wedding with Portia Robinson (Brook Kerr), but she’s so preoccupied with Curtis’ past that they haven’t made many decisions at all. Curtis can’t figure out why Portia is so obsessed with going backwards when they’re supposed to be walking into their future together.

His divorce from Jordan Ashford (Tanisha Harper) has been finalized and nothing about his past is going to stand in the way of their happily ever after now; so why does it seem like Portia doesn’t think it’s worth planning because she doesn’t think it’s really going to happen? If her anger toward Jordan doesn’t simmer down soon, she and Curtis just might end up arguing about whether or not she’s invited to the nuptials.

On the other hand, Curtis hasn’t seen any animosity coming from Jordan. It all seems one-sided and coming from Portia; so what gives? When Curtis confronts Portia, she’s going to jumble her words and struggle to give him a straight answer. So he might go to his ex instead looking for the truth. Is this really how Curtis should be approaching his marriage to someone new? How ironic is it that he can’t get the truth from Portia but believes he can from Jordan? My how the tables have turned. Jordan just might point that out to him.

GH Spoilers – Indicate Portia Robinson’s Guilt Eats Away At Her

Portia isn’t as comfortable with the idea of marrying Curtis as she’s let on. She loves him with all of her heart, and this marriage is everything she’s wanted for twenty years, but she isn’t sure how she can keep lying to him — even if it is by omission. Can she watch her daughter get married someday and watch Marcus Taggert (Réal Andrews) give her away as Curtis looks on?

Can she have children with Curtis and pretend it’s the first time, and make believe they are Trina Robinson’s (Tabyana Ali) half-siblings? What if Jordan tells the truth someday or it comes out some other way? Will Curtis hate her for marrying him with such a deeply rooted secret standing between them that she was never going to reveal? Portia is spiraling as she spends her days worrying about all of the what if’s.

Jordan is growing used to her new role as the martyr in this love triangle. She might have withheld information from Curtis during her marriage that caused it to come to an end, but she learned that lesson in a painfully hard way and has no intentions of going backwards now.

Jordan has grown, and while her job still requires her to keep some things close to her chest at times, she understands how important transparency is in any relationship now. As she watches Curtis march closer to marriage with Portia, will she keep quiet and stay out of his business, or is she going to feel obligated to stop him from marrying someone else who is intent to lie to him for her own benefit? Stay tuned for more GH news, updates, and spoilers to find out!