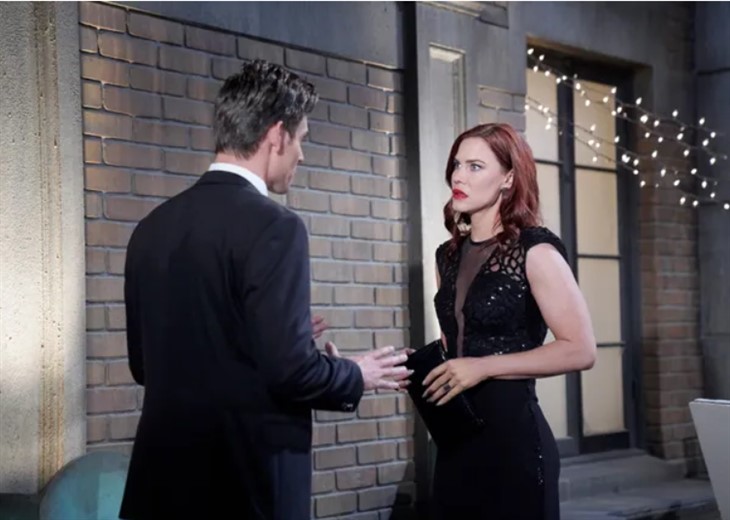 The Young and the Restless spoilers reveal Sally more torn between Adam and Nick than ever thanks to Adam’s drunken proposal.

When Adam Newman (Mark Grossman) spots Sally Spectra (Courtney Hope) at Society looking all flustered and frustrated, he can’t help but sit down next to her and see what is wrong. She tries to play her job search and conflicting feelings off as nothing but finally admits that she is not ok and part of it is the fact that he proposed to her in public — while drunk.

Sally is sick of Adam’s histrionics and games but Adam assures her that this is not a game. He loves her and believes they need to be together. Sally really does like Nick Newman (Joshua Morrow) and thinks he can be good for her, but there is just something about Adam and all of these romantic gestures that make him oh-so-appealing.

“He gives her this I-told-you-so smile and that makes Sally angrier than ever,” Courtney Hope said in the December 5, 2022, issue of Soap Opera Digest. “She’s really irritated about it because she’s like ‘I knew that you knew, but I didn’t want to admit it.'”

Adam suggests that this time they need to take their conversion to a more private place so they go back to her room at the Grand Phoenix and they lay everything out there regarding what has happened over the last few months and how things went so wrong.

“Sally just wants to be honest,” Hope said. “She wants to lay everything out in the open and it’s such an emotional roulette wheel of emotions, but she feels she needs to vent so she can move on from Adam.”

However, moving on is the last thing that happens as Sally and Adam fall into a passionate kiss. Will it lead to more than just kissing? Is this the breaking point that Adam has been waiting for? It might be as Sally admits those old feelings are still there. The question is — will she act on them? She knows the safer choice, but is the safe choice always the right choice? Stay tuned to The Young and the Restless weekdays to find out.