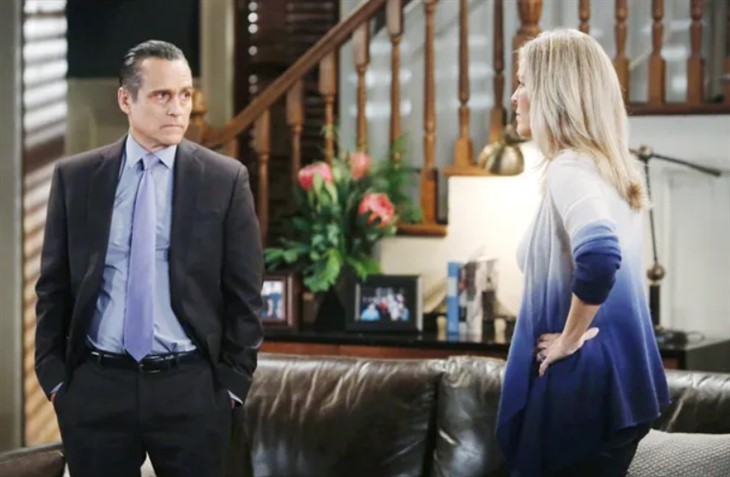 General Hospital spoilers reveals Sonny Corinthos (Maurice Benard) isn’t known for being patient or understanding. He doesn’t dish out many second chances, and Dex Heller (Evan Hofer) has already had one. When he discovers his new associate’s missteps somehow overlap with his ex-wife, Carly Spencer’s (Laura Wright) latest lie, he will jump to the most logical conclusion he can come to as a man who is grieving the loss of his marriage and lying to himself about being okay with it.

As Sonny grows green with envy that Dex may be hitting the sheets with his ex-wife, he won’t show him any mercy as he calls him into his office. Who is going to save Sonny’s newest bad boy from the trenches of this business when Sonny gets the wrong idea?

When Carly last saw Sonny, she told him about her budding relationship with Drew Cain (Cameron Mathison). She wasn’t exactly bursting at the seams to let her ex-husband into her personal lovelife, but Nina Reeves (Cynthia Watros) had sort of already put him there. Since she can’t keep her nose out of Carly’s business, she decided to jump to conclusions about what she thought she saw when Carly entered a room at the Metro Court Hotel with Brick (Stephen A. Smith).

When Nina went running back to tattle to Sonny and imply there was something torrid going on, Sonny quickly put his own concerns to rest. That being said, Carly was also sure to address the confusion and showed up personally to let Sonny know she definitely shares nothing more than friendship with Brick. As a testament to that, she offered up that she was seeing Drew now, and she implied it was only Drew. Sonny is going to question that now.

The problem started when Sonny knew Dex’s story didn’t add up. He wasn’t at all suspicious about Carly’s version of events with Brick, and Drew definitely confirmed his relationship with Carly exists. When Brick starts retracing Dex’s steps following the crash — or rather, the steps Dex told Sonny he took — they won’t add up. There won’t be evidence from street cameras or any other resource Brick can pull that show Dex was where he claims he was. It’s not going to click for Brick until he realizes he is the connection between Dex and Carly.

General Hospital Spoilers — Brick Discovers Half Of The Truth

When Brick picks the lock at Dex’s place while he’s in the shower, he’s going to find more than he bargained for. No, Carly won’t be in the shower with him, but the bottle of antibiotics on the counter will tell the rest of the story. As soon as Brick puts two and two together and realizes it’s the same supply he gave to Carly, he will know she was helping Dex.

But why? That’s for Sonny to figure out after Brick reports back to him. As Sonny rails against Dex for cozying up to his ex-wife, Dex won’t dare rat Carly or Josslyn ‘Joss’ Jacks (Eden McCoy) out, which is going to land him in serious trouble. Will Joss show up in time to clear his name by tarnishing her own? Keep checking back with us for more GH news and spoilers to find out!